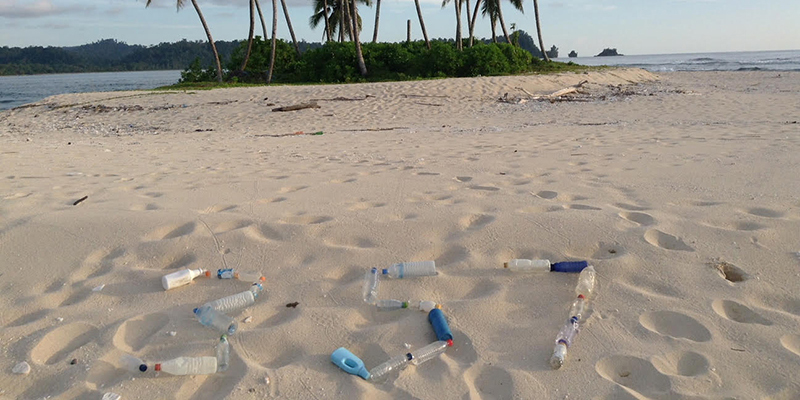 Australian guest blogger Blue Robinson is a writer for Seahorse International Sailing Magazine, and recently took a surfing trip through North Sumatra and shared the contrast between the beauty of nature and the damage of man-made plastic pollution.

The atoll is tiny, just a hundred and seven paces from end to end, and it has ten palm trees at its highest point. It takes me three minutes and four seconds to walk around it at the low tide mark, and close to the base of the trees I have to wade through surf to complete the rapid circumnavigation. All this means it a bit bigger than two tennis courts, and as I strolled around this stunning atoll in North Sumatra, I counted the plastic bottles washed up on its golden sand, and it came to three hundred and fifty-seven. Of course there could have been more – under the hot sand or deep in the foliage under the trees, breaking down into tiny shards to wash back into the sea and contaminate the ocean as micro-plastic, but alongside shoes, fishing floats, cigarette lighters, drinking straws and rope – the bottles littered the atoll, so that wherever you looked and wherever you walked, there was plastic.

The atoll is uninhabited and is a hundred miles away from any city, and so the plastic bottles have come from the ocean – and if they cover this speck of sand in remote Sumatra, they must litter the beaches on all the nearby islands, which I confirmed the following week as we surfed a new reef break every day.

Standing here in this tropical paradise, it occurred to me that I was viewing a tiny snapshot of the planet, and the evidence was right at my feet. If this saturation of ocean plastic continues, there will be a time where your great-grandchildren – or even your grandchildren, will not be able to eat anything from the ocean, as it will be deemed too dangerous to eat fish that has come from a toxic plastic soup.