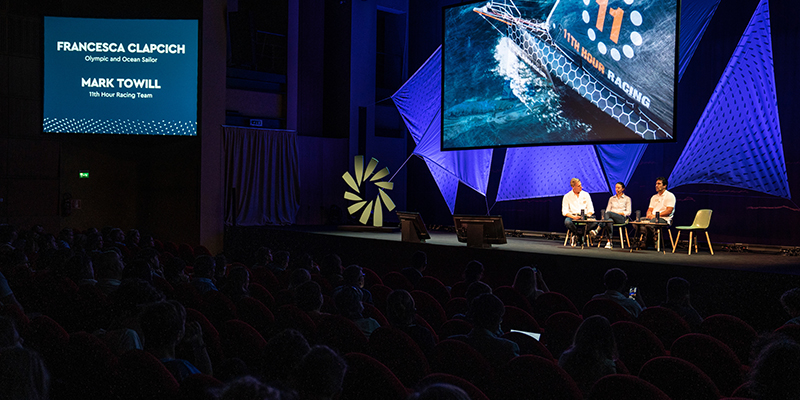 First in series of The Ocean Race Summits delivers in Genoa

As a sponsor of The Ocean Race, 11th Hour Racing attended the first The Ocean Race Summit of 2019 in Genoa, Italy. From the Summit, Alessandra Ghezzi, Communications Director, 11th Hour Racing, shared, “The colours, sights, and sounds of Genoa offer an incredible reminder of how our lives revolve around the ocean — in this case, the Mediterranean, which has seen history unfold and is crucial to the well-being of so many countries and global ecosystems.” 11th Hour Racing Team member and two-time Ocean Race competitor, Mark Towill joined a panel to speak about experiences encountering plastic debris in some of the most remote waters on the planet during the last edition of the round-the-world-race. The article below walks us through that day on September 20th.

The event brought together leaders from sport, business, science, politics and the arts

Impactful solutions to address the crisis affecting the health of our oceans have been showcased at the first in an international series of Ocean Race Summits in Genoa, Italy.

Organised by The Ocean Race, the day saw politicians, academics, professional sailors and business leaders gather in the maritime heart of Italy, inspiring guests to take action for our seas.

A host of businesses, at the cutting edge of innovation, such as circular economy leaders Aquafil, Interface and Ambercycle, explored scalable alternatives for manufacturers to use to transition away from the plastic that is entering the marine environment.

Explorer Alex Bellini, recently returned from the Great Pacific Garbage Patch, and the World Wildlife Fund for Nature’s (WWF) Stefania Campogianni, showed how widespread the plastic problem is in the Mediterranean Sea and the effect it is having on marine species.

Genoa’s Mayor Marco Bucci detailed how the city is moving towards a more sustainable future as a week of climate action began in towns and cities across the globe.

To mark this action week, Francesca Ghio, Genovese leader of youth movement Fridays For Future, closed the conference, demanding decisive action to safeguard the future of the planet.

Anne-Cécile Turner, Sustainability Director of The Ocean Race, revealed that the round-the-world sailing race had signed up to the UN Sports for Climate Action Framework, making commitments to inspire others to take effective action too.

“We want to lead by example and by signing the UN Climate Framework we have committed to inspire other sporting events and reach beyond the sector with a message that if we want to protect our ocean and the planet then we all need to make our operations as sustainable as possible,” Turner said.

The event was streamed to a global audience of ocean health advocates, bolstering The Ocean Race commitment to minimise the environmental footprint of the event as much as possible by encouraging people not to fly, and to follow via the live stream.

He said: “Events like The Ocean Race Summits are so important because they inspire, help raise awareness and galvanise action for healthy oceans.”

Two-time Ocean Race competitor Mark Towill, with the 11th Hour Racing Team, and Olympic sailor and Ocean Race competitor Francesca Clapcich shared the stage to talk about their experiences encountering plastic debris in some of the most remote waters on the planet during the last edition of the round-the-world race.

The summits build upon the award-winning series from the last edition of the race and form a key element of the ‘Racing with Purpose’ Programme, in collaboration with Premier Partner 11th Hour Racing and with the support of Official Partner Bluewater.

“The colours, sights, and sounds of Genoa offer an incredible reminder of how our lives revolve around the ocean — in this case, the Mediterranean, which has seen history unfold and is crucial to the well-being of so many countries and global ecosystems,” said Alessandra Ghezzi, Communications Director, 11th Hour Racing.