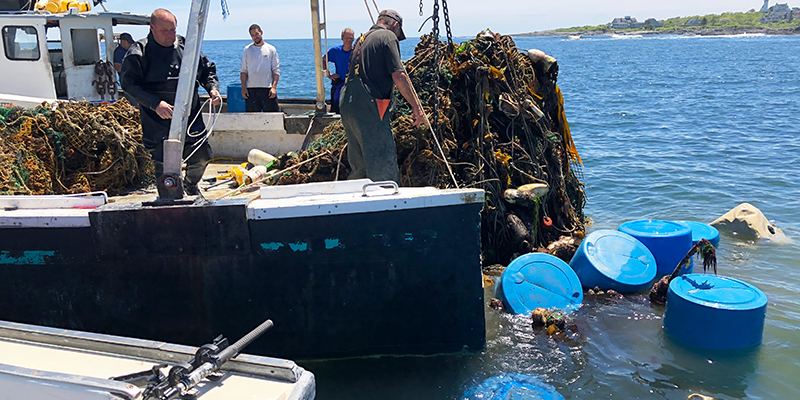 Ghost gear is considered to be one of the most harmful forms of marine debris, which is why we’re proud to support Ocean Conservancy‘s Gulf of Maine Ghost Gear Initiative to remove fishing gear that has been abandoned, lost or otherwise discarded. The organization recently removed 10 tons of equipment off the coast of Portland, Maine, read below for the first-hand account of the event from Jordana Merran.

As a kid, I had such an active imagination that as soon as my feet left the diving board at my neighborhood pool I would focus on one thing and one thing only: speed-paddling to the ladder for fear that something was lurking beneath.

Looking back, I mostly chalk that up to having watched the movie Jaws way too young (I remember secretly sitting on the staircase and peeking through the banister spindles into the living room where my parents had it playing on VHS). But after a recent trip to Portland, Maine, I can think of a far more serious threat than any shark (or sea serpent, or crocodile…): ghost “gear balls”.

Gear balls are huge, tangled masses of ghost gear—lost, abandoned or otherwise derelict fishing gear that includes nets, ropes, lines, traps and other equipment. No one knows for sure how much fishing gear is currently floating around in the ocean, but conservative estimates suggest it’s something to the tune of 800,000 tons, which could have real impacts on ocean health. Research published by Ocean Conservancy in 2016 found that ghost gear was the deadliest form of marine debris. It continues to entrap and kill ocean animals long after it is lost at sea, and since much of it is made of plastics, it never truly goes away.

Worse, no one benefits from ghost gear in the ocean: in addition to harming wildlife, it affects fishers, seafood companies and the coastal economies that depend on a healthy ocean. The Global Ghost Gear Initiative (GGGI)—a consortium of conservationists and public and private sector allies tackling ghost gear, globally—was founded precisely to bring all of these key groups together for the purpose of crafting and implementing solutions that prevent, reduce and remove ghost gear from the marine environment. Earlier this year, as part of our commitment to address the largest sources of ocean plastic pollution—from too many, unnecessary single-use plastics to inadequate waste collection and recycling systems around the world—Ocean Conservancy took the helm of the Global Ghost Gear Initiative as Lead Partner.

I witnessed the power of the GGGI platform firsthand earlier this month while aboard the Fishing Vessel Murphy’s Law, in the Gulf of Maine. Working with GGGI member Gulf of Maine Lobster Foundation (GOMLF), local lobstermen and expert salvage divers, we set out to remove what we thought would be a 5,000-pound gear ball from the seafloor just off Cape Elizabeth Lighthouse. Supported by 11th Hour Racing, these removal projects are critical to eliminating the threat of ghost gear to wildlife, fisheries and the Maine economy.

Video below: Fishermen work together to remove the 10 tons of ghost gear.