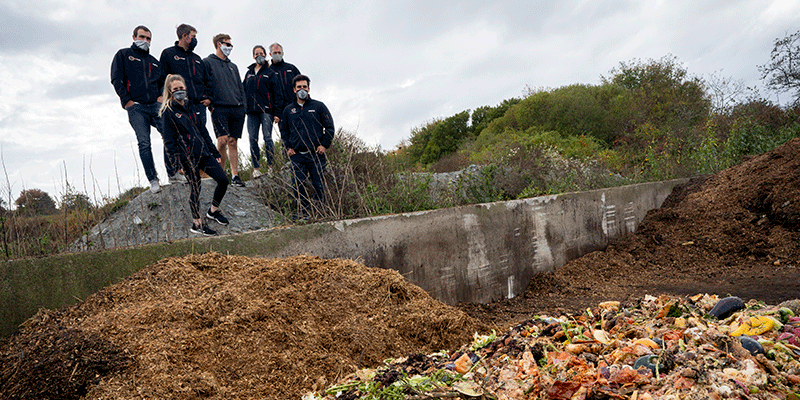 How Composting Can Help Keep Climate Change Under Control

Being able to positively impact the state of our oceans through land-based composting might not seem a natural fit but that’s just what we learned about when visiting Clean Ocean Access on World Food Day earlier this month. A huge amount of biodegradable food waste – something we often deem to be ‘safe for the environment’ because it’s ‘natural’ – is actually having a negative impact when it is thrown away in our rubbish bins and sent to the landfill.

In our Team’s home state of Rhode Island alone, 33% of waste that goes to the landfill is from organic matter. Aside from the fact that landfill capacity is a major problem in itself – the Rhode Island landfill is expected to reach capacity by 20234, food waste in these environments disintegrates dangerously, emitting highly potent greenhouse gasses, such as methane and carbon dioxide.

SO, WHAT’S THE ANSWER? COMPOSTING! IT’S NATURE’S CIRCULAR SOLUTION – FROM TABLE TO FARM TO SOIL AND BACK AGAIN.

Not all carbon-reduction solutions come from the high-tech arena. Something as low-tech as the composting of food waste will, if done at scale, deliver significant climate change benefits. Here’s a quick science lesson:

A large proportion of what we throw away can be composted into soil. When food waste decays in a landfill, it does so anaerobically (without oxygen) and without natural bacteria. When composted, aerobic (with oxygen) decomposition and naturally occurring bacteria in the soil help to prevent greenhouse gas emissions and enable the soil to sequester carbon.

HOW DO YOU START COMPOSTING?

Composting is as simple as scraping your food waste into a separate bin, then emptying it into either your own garden composter or sending it away via curbside composting initiatives.

Our sponsor, 11th Hour Racing, has made this small sustainable step super simple for everyone in Rhode Island with a cross-collaboration program called Healthy Soils, Healthy Seas Rhode Island. This initiative brings together five local organizations (Clean Ocean Access, Aquidneck Community Table, The Compost Plant, Rhode Island Nurseries, and Rhodeside Revival) to establish business, residential, and backyard composting. 11th Hour Racing has subsidized this service through a grant to Clean Ocean Access to kickstart the movement on home turf and once signed up all residents have to do is scrape their scraps and say, ‘see you later’!

The soil superheroes at RI Nurseries take all the yard waste collected on Aquidneck Island and combine it with residential and restaurant food waste to create soil – the black gold of the farming industry. The soil is sprinkled over the local fields and voila, leftover dinners are helping to grow new crops.

“I’ve been passionate about composting for a while,” explained 11th Hour Racing Team skipper, Charlie Enright. “Five years ago when I bought my first house with my family, one of the first things we did was make a compost bin. Over the five years we lived in that house, we were able to see a full cycle of compost and reuse it in our garden, which was really satisfying to see!

“Composting has a lot of direct and indirect benefits, not only to the planet but the health of the oceans too,” he continued. “I’d really encourage people to start using composted soil in their gardens and landscaping to help the demand for the final product increase. This will make it scalable and make the economics work, which will, in turn, help to protect our planet and reverse the impacts of climate change.”

If you want to find out more about composting in Rhode Island, check out Healthy Soils, Healthy Seas Rhode Island. Or if you live further afield, try searching the internet to find a community or council initiative near you.

So get started now and share with us your composting stories! Let’s work together on land and on the sea, to regenerate our oceans and leave a positive impact in our wake.