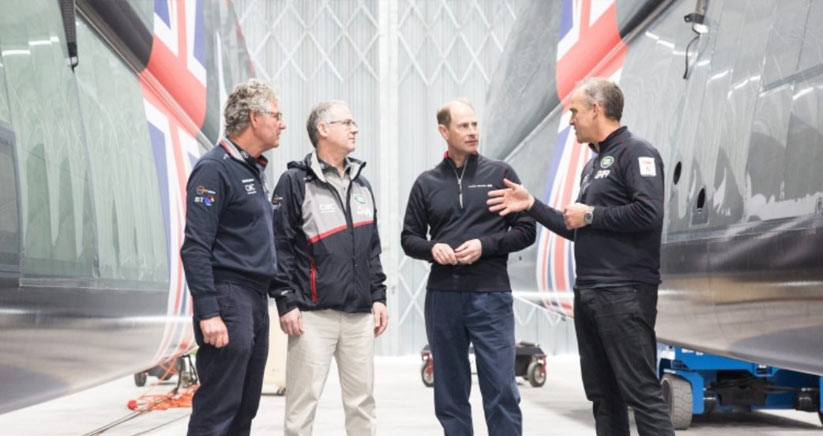 On Sunday, March 5, 2017, His Royal Highness, Prince Edward, The Earl of Wessex, visited Ben Ainslie’s British America’s Cup team, Land Rover BAR’s, base in Bermuda. Bermuda is the host venue for the 35th America’s Cup and half the team relocated from the Portsmouth HQ at the end of 2016, in preparation for the racing which starts on 26th May.

The America’s Cup is the oldest trophy in international sport and started in 1851 with a race around the Isle of Wight. Despite previous attempts, a British team has never won the Cup.

During his visit to the team base, HRH met Sailor and Designer, Bleddyn Mon, Shore Team Manager, James Stagg and Base Manager, Dave Powys and was shown the team’s foiling America’s Cup Class (ACC) race boat, ‘R1’. Designed using the very best of British technology and innovation, R1 took over 35,000 hours to construct and can reach speeds of 60 mph.

HRH was also given a tour of the 11th Hour Racing Exploration Zone, a dedicated and free educational space within the base, which brings to life critical topics around ocean health, sustainability, innovation and technology.

HRH was on the Island to support the celebrations of the 50th anniversary of The Duke of Edinburgh’s International Award in Bermuda, meeting young people taking part in the local Award program and engaging with program volunteers. The Duke of Edinburgh’s International Award program is the world’s leading youth achievement award, giving millions of 14 to 24-year-olds the opportunity to be the very best they can be.

The Duke of Edinburgh’s International Award has a strong link to sailing, Award participants were amongst the first to introduce the Optimist dinghy to Bermuda, by building the dinghies for their program skills requirements and sailing them for their physical recreation. Land Rover BAR sailors including four times Olympic medalist, Ben Ainslie and Rio 2016 gold medalist, Giles Scott, started their sailing careers racing in the boat.