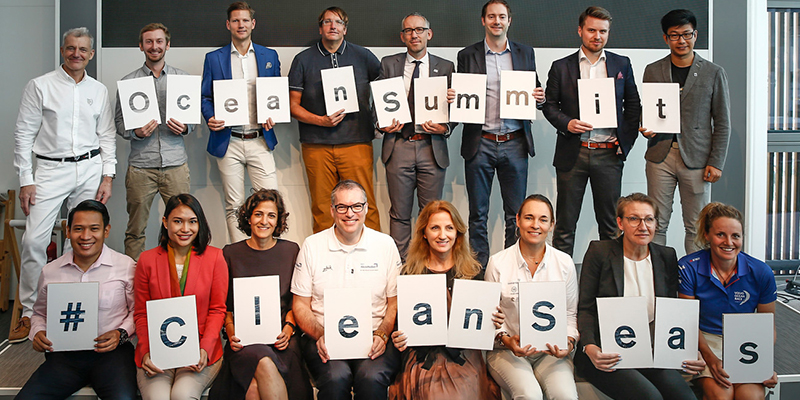 Sailors, scientists, and government and business leaders gathered for an eventful day dedicated to the ocean at the Volvo Ocean Race Village.

The event is a focal point for 11th Hour Racing’s partnership with the Volvo Ocean Race and is focused on creating solutions to solve the plastic pollution crisis facing our oceans. The summit brought leaders from around the world, and just across the harbor to discuss plastic pollution. A 2015 report from Ocean Conservancy, estimated that over half of land-based plastic leakage comes from just five countries, and all five have coastlines in the Pacific Ocean. By knowing where the most work is needed, we have the opportunity to create change – and what better place to discuss turning the tide on plastic, than where solutions are most needed.

The morning was kicked off by Johan Salén, Co-President, of the Volvo Ocean Race and Anne-Cécile Turner, Sustainability Programme Manager with their introductions highlighting the Volvo Ocean Race’s commitment to sustainability. Next, Wendy Schmidt, President of The Schmidt Family Foundation and Co-Founder of 11th Hour Racing, recapped the success seen at previous Ocean Summits and announced via video 11th Hour Racing’s formal signing of the #CleanSeas pledge.

“But we’re at a point of crisis, around the world when it comes to the health of our oceans. Human industrial activity and throwaway culture, has done more to change the chemistry of our oceans in just the past 100 years, than any process we know of since 50,000 years ago.” – Wendy Schmidt

The morning also featured speakers well versed in the fact that ocean plastic is a global problem, but here the concept of thinking globally, acting locally, has the power to make a difference worldwide. Speakers from the United Nations, World Wildlife Fund, and the China Scrap Plastics Association underscored these challenges and opportunities.

The afternoon was filled with impressive presentations and a panel discussion featuring local NGOs and innovative entrepreneurs, all working to eliminate the need for single-use plastics. Highlights included:

Stiv Wilson from the Story of Stuff, a non-profit dedicated to changing the take-make-waste economy, fighting to keep drinking water public and free, and finding solutions to end plastic pollution.

Safia Qureshi founder of the Cup Club, started a small project to rid a college campus of single-use coffee cups and is now the proud winner of the New Plastics Economy Innovation Prize. The Cup Club combines a set of proven technological solutions (RFID tagging, mobile interface, Internet of Things) to track individual cups and reward its users for being in the system.

The event ended with a dedication to finding more solutions and turning awareness of plastic pollution into action: two hands-on workshops dedicated to discussing the use of single-use plastics at events in the region, and a panel discussion and Q&A session including organizers, venues, suppliers, solutions providers, consultants, and specialists. Each gave a short introduction to its sustainable event management focus, issues and achievements.

We are looking forward to the next Ocean Summit in Newport, RI on May 18th.