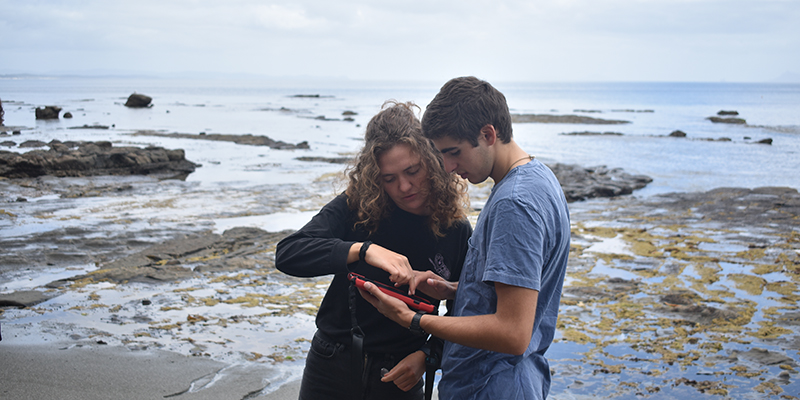 Have you ever heard the statistic that 8 million metric tons of plastic enter the ocean every year? Meet Dr. Jenna Jambeck, the lead researcher of the paper that shared this statistic with the world. Dr. Jambeck is one our grantees working on plastic pollution at the University of Georgia (UGA). We are proud to support her work with the Marine Debris Tracker, an app that empowers beach cleaners and boaters worldwide to become data collectors, creating a global database of plastic pollution.

Previously supported by 11th Hour Racing in 2015, this new grant project will build on and expand the Marine Debris Tracker app, and allow the development of new partnerships. Jambeck will be working with Sea Education Association (SEA) with the goal of using and applying the data collected to inform change around the world.

We had the opportunity to ask both Dr. Jenna Jambeck and Dr. Kara Lavender Law, a Research Professor of Oceanography, at Sea Education Association about their work on marine debris.

Dr. Jenna Jambeck, Associate Professor, College of Engineering at the University of Georgia

How does the Marine Debris Tracker empower your work?
I remember in 2010 when I envisioned the Marine Debris Tracker, I was thinking how amazing it would be if people around the world would tell us about the litter they picked up – and I was so excited when we got our first data. And then it started coming in weekly. And then it started coming in daily. And now it is nearly a constant stream of data from incredible people all over the world. They are the ones making a difference in their location, keeping trash out of our waterways, and helping the ocean. The data contributes to a bigger picture of the issue.

The Marine Debris Tracker clearly shows, through data collection, that everyone’s everyday actions make an impact, both when taken collectively and over time. This not only empowers my work but should also empower everyone around the world to know that they can take action. Then tell others about what you are doing so they can join in too.

Plastic pollution can be a pretty daunting topic – what gives you hope?
I believe in people. When people tell me, “Guess what? I am trying not to use straws now and telling my friends why” or “I am now carrying a reusable water bottle” – I realize that the awareness of this issue has grown so much. When I first started working on it in 2001, I was told no one cared about it. But the change in both awareness and actions since then have been significant. Although this is juxtaposed by the increase in waste generation and plastic use. But even in places where the influencing factors of plastic leakage are the most intense, I have seen change. We have more to go, so no one should feel like we are done at all. But people should realize the actions they are taking, the advocacy they are doing, it is making progress. And it all builds up over time. So I am optimistic we will continue to make headway, and this is what gives me hope.

Speaking of daunting topics, the IPCC (Intergovernmental Panel on Climate Change) report says we have 12 years to get our act together on climate change – how can work on plastic pollution contribute to reducing carbon emissions?
There are some indirect ways this might be related. First of all managing waste takes time, money and energy. So less waste means less energy needed to manage it – source reduction is important. In addition, plastic is made from the raw input of oil or natural gas – both fossil fuels. As we use less of those for energy, companies may put more fossil fuels into plastics. But we can try to reduce that demand, especially for the items most leaked into the environment. New research has also shown that plastics release gases as they are exposed to air over time, and one of the gases is methane, which can contribute to climate change. Plastics have also allowed us to package food with light, inexpensive materials, which many would say is a good thing (there is energy and water input into foods, you really don’t want them to spoil before eaten), but it also means we are transporting and distributing food much further around the world than ever before. At what cost to our carbon footprint? Eating locally sourced food has become a growing trend, and it is, of course, what we used to do. I think there is a tremendous opportunity for innovation as we think about how to meet people’s needs and increase livelihoods but not produce more waste.

SEA has been studying plastic pollution for a long time, what are the benefits of using the Marine Debris Tracker?
SEA has a decades-long history of studying floating microplastics in the open ocean by towing plankton nets with very fine mesh (~⅓ mm) and counting the small plastic particles that are collected with plankton and other surface-dwelling marine organisms. The Marine Debris Tracker compliments this work by allowing students to document larger items of floating debris visible by eye from the deck of the ship, which may include recognizable trash items, lost fishing nets or buoys, or pieces of once-larger items.

How will SEA use the data collected by the Marine Debris Tracker, along with other data captured about plastic pollution?
From our previous collaboration with Dr. Jambeck, we know that plastic waste generated on land is a large source of plastic debris to the oceans. However, in any particular location, the amount and types of debris entering the ocean are not well known. In our SEA Semester programs, especially in the South Pacific and Caribbean Sea, where island populations must both import goods and manage their waste, we have a unique opportunity to document the waste on land that can leak into the ocean, to not only quantify this potential leakage, but also to link back to the proximate sources of the waste. In addition, island beaches are often repositories of debris that washes ashore from elsewhere – perhaps from very far away. By documenting the types of debris found on beaches, we can learn something about the sources of debris and potentially the drift paths it has taken. Our goal is to build a database of litter/debris amounts and types found in and around these islands, to better understand sources and to inform solutions to this pollution problem.

The Marine Debris Tracker has approximately 1,500 regular users and over 15,000 downloads. Users have collectively logged 1.2 million pieces of debris. This open-source data feeds directly into peer-reviewed research on marine debris and is the only application that can be used offshore by sailors and boaters.