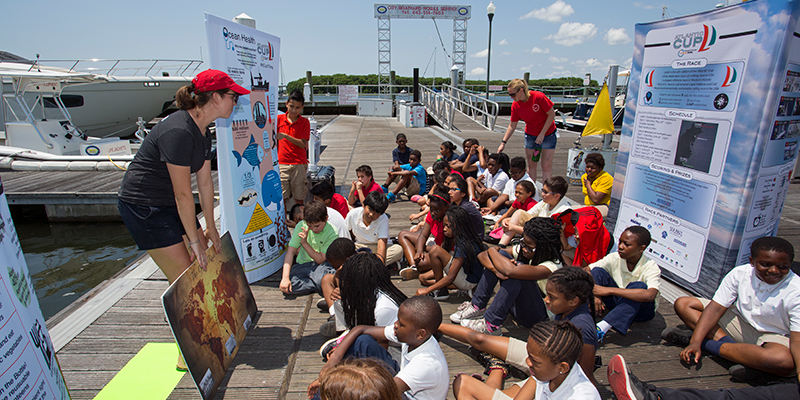 On March 31, 2020, The Atlantic Cup made the following update: It is with great regret that Manuka Sports Event Management announces the unavoidable cancellation of the 2020 Atlantic Cup, which was scheduled to take place June 5-21. Click here for more information.

We are proud to continue our support of the Atlantic Cup Kids Program in 2020. Since 2012, the program has reached more than 4,000 students and educated them about the environment, sustainability, sailing, and safety at sea. Below is the official announcement from Manuka Sports Event Management.

Manuka Sports Event Management is pleased to announce 11th Hour Racing as the Official Education Partner for the 2020 Atlantic Cup. With 11th Hour Racing’s support, the Atlantic Cup is able to expand upon the already successful Atlantic Cup Kids Program that debuted in 2012 and has since then reached more than 4,000 students.

Covering 1,008 nautical miles and being the only race to sail around both major east coast capes – Cape Hatteras and Cape Cod – the Atlantic Cup is the longest and toughest offshore race in the United States.

The Atlantic Cup Kids Program provides an opportunity for students, teachers and mentors to learn about the history and science of sailing, as well as the oceans and environment. The curriculum includes hands-on activities and on-site interactions with the sailors competing in the race, and also an online component with downloadable worksheets. In addition, students and fans can vote for their Atlantic Cup Kids Favorite Team here.

Former Atlantic Cup champion, solo around-the-world sailor and 11th Hour Racing ambassador, Dave Rearick, is known to the Atlantic Cup Kids as Captain Dave. Captain Dave visits the school districts in Charleston, S.C., Jersey City, N.J. and Portland, Maine in advance of the race to educate children in the classroom before their on-site experience while the boats are in port. Inquiries for school visits can be directed to Katie@atlanticcup.org.

The 7th edition of the Atlantic Cup will start June 5th in Charleston; from there teams of two will race to New York City and after a brief stopover continue on the second leg to Portland, Maine. The race will culminate in Portland the weekend of June 19th, with a two-day inshore series.

President and Co-Founder of 11th Hour Racing, Rob MacMillan said, “We are excited to continue our support of the Atlantic Cup youth education program. Since its inception, the race has reached thousands of kids in classrooms, as well as on-site when the race is in their hometowns. Through fun, hands-on activities, the kids learn about the environment, sustainability, sailing, and safety at sea. Connecting with students this way empowers them to grow into ocean stewards of the future.”

11th Hour Racing was the Presenting Sponsor of the Atlantic Cup from 2011-2016, and Official Education Partner in the 2018 edition.

Manuka Sports Event Management Co-Founder and Atlantic Cup Race Director, Hugh Piggin, said, “We’re proud of the impact Atlantic Cup Kids has had on the communities the race travels to. To be able to have brought programming around ocean health and offshore racing to over 4,000 students since 2012 is a great accomplishment and with 11th Hour Racing’s support we look forward to sharing this terrific program with even more kids this year.”

The race is sailed solely in Class40s, a monohull race boat designed for shorthanded racing.