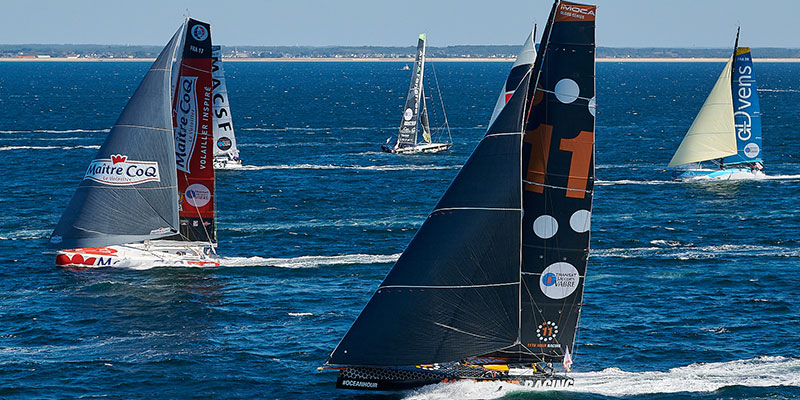 In two days, the 11th Hour Racing Team will set sail in the Transat Jacques Vabre (TJV), a storied and challenging race from Le Havre, France, to Salvador De Bahia, Brazil. This is the team’s first major race after nearly three months of training. You can follow the action via live updates starting at 7 am EST on Sunday, October 27th, on the team’s website.

What is the TJV?
First raced in 1993, the Transat Jacques Vabre is a 4350-mile double-handed race that celebrates the coffee route from the Caribbean and South America to France. Considered one of the toughest trans-Atlantics held, sailors and spectators equally revere the race. Among the competition, there are five new IMOCA 60s that have launched in the last year. Learn more about the history of this exciting race here.

Who is sailing on 11th Hour Racing?
For this event, Charlie Enright and Pascal Bidégorry will co-skipper the 11th Hour Racing IMOCA 60. They have been training together for three months familiarizing themselves with the boat, and recently competed together in the Défi Azimut.

What’s special about this race?
The scale! Three hundred and five teams have participated in the race since its inception, and the 2019 edition will see 59 boats (29 IMOCAs, 27 Class 40s, and 3 Multi 50) across the start line. Hundreds of thousands of sailing fans will visit the race village in Le Havre.

How is the team protecting ocean health?
Driven by the vision of vibrant, healthy oceans and communities supported and inspired by the sport of sailing, the team has placed sustainability at the core of all its operations and aims to accelerate change through sporting excellence in sailing, ocean advocacy, and sustainable innovation.

The Team Principals recently signed a Sustainability Policy committing to four guiding principles (Leadership, Innovation, Collaboration, and Legacy) with a focus on:

What does it mean to sign a sustainability policy?
It takes strong leadership to drive profound change. The signing is a symbolic commitment that demonstrates a culture of support and accountability throughout the 11th Hour Racing Team’s campaign for The Ocean Race in 2021-2022. Read more about the policy from Sustainability Manager, Damian Foxall.

How does the TJV address sustainability?
In 2007 the Transat Jacques Vabre assessed its carbon footprint, and since then, the event has embraced ocean stewardship and sustainability. The race village hosts an education space called Positive Initiatives, which is dedicated to sustainable, ecological, and social development. The event organizers are also working to remove single-use plastic from the race village, by offering reusable cups at coffee stations and water refill stations (that we are proud to support with Bluewater), along with many more sustainability initiatives.

Last question. What does the boat look like sailing through the water?
Take a look for yourself! Here’s ten minutes of spectacular sailing footage of the 11th Hour Racing Team.