This visit follows on from a packed-day of activities on Thursday hosted by the 1851 Trust at the Louis Vuitton America’s Cup World Series Portsmouth Race Village. There over 200 young people from the local area had the chance to learn more about the America’s Cup environment and the technology behind sailing by taking part in educational activities focused on team work, sustainability and ocean health. As well as taking part in a Single Plastic Use hunt and ‘gutter boat’ racing, they also used interactive equipment to gain a greater understanding of the technologies behind sailing.

The young people who met The Duke and Duchess of Cambridge are all involved with Active Communities Network Havant/Leigh Park delivery centre. Active Communities Network is a youth and community development charity which uses sport to build young people’s skills, improve their confidence and self-esteem, broaden their horizons and raise ambitions.

One young person who met The Duke and Duchess of Cambridge is Tayah, 17. She has had a challenging upbringing, moving around the country due to a breakdown of her family unit. She now volunteers with Active Communities Network. In October last year Tayah had the opportunity to go sailing with Sir Ben Ainslie and the Land Rover BAR team when Sir Ben became a Laureus Ambassador. This was a dream come true for Tayah as Sir Ben is her sporting hero.

She said: “It was so surreal meeting The Duchess today. We spoke about how the first day went at the Race Village and also about the Tech Deck and how it felt to go sailing with Sir Ben Ainslie. It was so nice meeting her and The Duke of Cambridge!”

Zak says: “It was actually quite amazing meeting the Duke and Duchess of Cambridge, they were really nice. They asked me how I came up with the design of the trophy.” 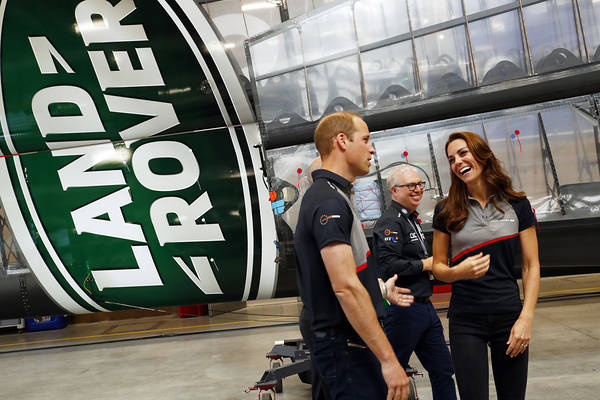 Following their meeting with the young people, Their Royal Highnesses visited the Land Rover BAR team base to see their state of the art testing boats and met members of staff driving the advanced design and technology forward to help the team achieve their goal to bring the Cup home. They then watched the teams from USA, France, New Zealand, Japan, Sweden and the British Challenger compete in three races on the Solent, alongside the thousands of fans watching on from the Race Village on Southsea seafront. At the end of the day Their Royal Highnesses presented the event winners with their trophy.