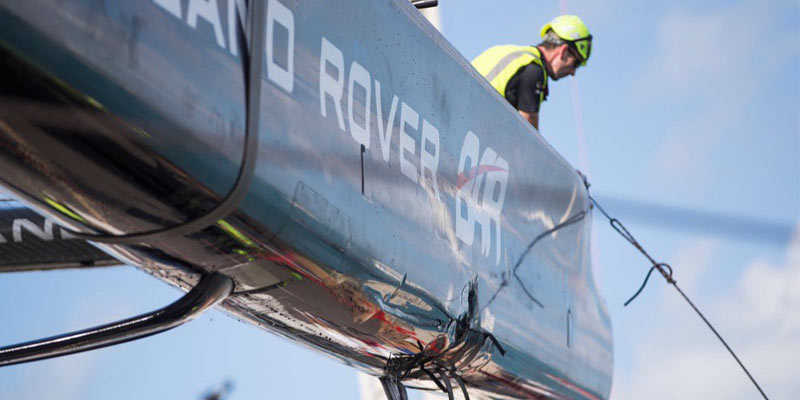 A long night in the workshop, and a very tough day at the office

It was a long night in the workshop as the shore team battled to get Land Rover BAR’s race boat ready for the second day of the Louis Vuitton America’s Cup Qualifiers. Despite serious damage to the hull after the collision with Soft Bank Team Japan in yesterday’s second match, the boat was ready to race. It was an extraordinary, all night effort from the shore team, the unsung heroes of the campaign, who have consistently been working 16-hour shifts for weeks, only to pull an all-nighter to get R1 back on the water. 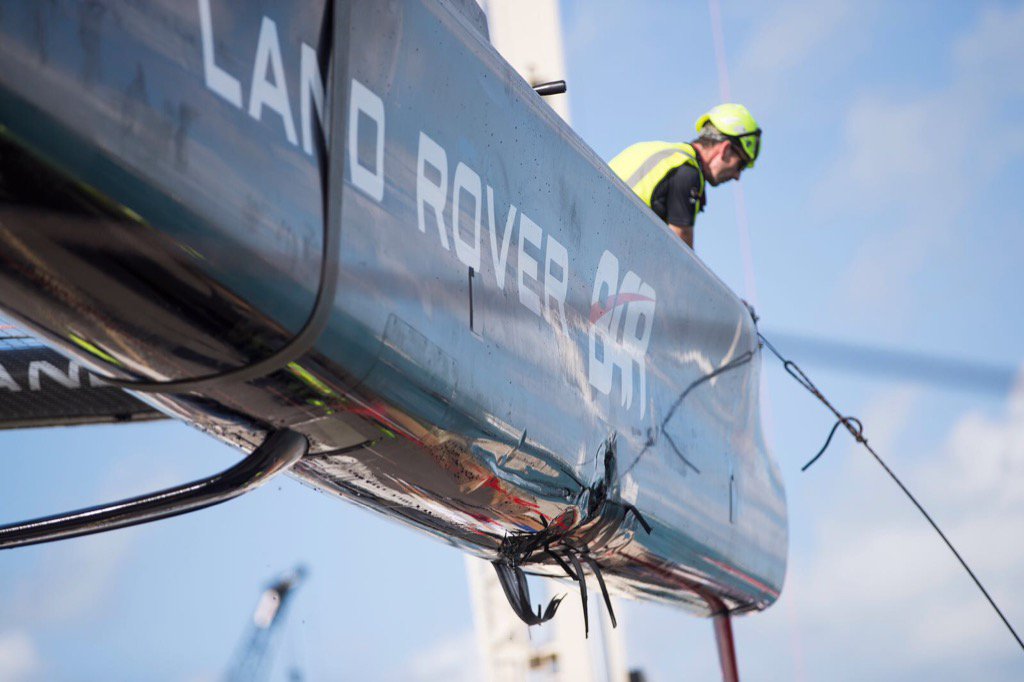 The team missed the morning practice session, but were ready for their first match against the Defender of the 35th America’s Cup, ORACLE Team USA (OTUSA). It began brilliantly, as Ben Ainslie locked out OTUSA skipper Jimmy Spithill at the start and led by 9s at the first mark. Land Rover BAR still held a narrow lead after the next two legs, but fell off the foils after gate three, giving OTUSA the pass and a lead that they held to the finish.

Giles Scott, Tactician; “Our shore crew guys did an awesome job overnight, there was a six-foot hole in the bottom of the boat at eight o’clock last night, and they patched it up. The boat’s getting faster and faster each day, and we’re really pleased with that. Today, unlike yesterday, we felt like we made a few errors at crucial moments; at windward marks, in particular. A bit frustrating today, but we’ll go away and review it and get sorted out for tomorrow.

The details were only a little different in the second race of the day against Emirates Team New Zealand (ETNZ). The Kiwis fouled in the pre-start by entering the box four seconds early and were penalised by two boat lengths off the start line. Land Rover BAR’s led at the first mark, and ETNZ judged the next leg nicely to slide by to a narrow lead. Some unforced errors by Land Rover BAR handed the Kiwis the victory.

Ben Ainslie, Skipper and Team Principal: “The boat was great, and the shore team did a fantastic job and put the boat back together in an incredible amount of time given the size of the hole. The boat was performing well; our speed was pretty good at times. Ultimately we didn’t sail well enough, and we’ve got to go away and look at that and take some lessons from the mistakes we made today, keep improving our speed and work on our sailing technique and I think we can be really strong.

Jono Macbeth, Sailing Team Manager: “We went out there after an incredibly tough night in the boat shed. I’m sure it’s a testament to the shore crew that we were even out there today. We always knew today was a tough day with probably the top teams out there that we were going up against.

“We started incredibly well against both Emirates Team New Zealand and Oracle Team USA. Unfortunately, we made a couple of errors around the track, and as we are seeing, small errors at this regatta seem to make a huge difference to where you sit on the leaderboard.

“There is plenty for us to keep working on, and on a positive note we do have the boat speed there and we are continuing to develop. We are just going to keep on pushing and working harder and we’ll get there in the end.”

David ‘Freddie’ Carr, Grinder: “First and foremost, we were over the moon to be out on the water, because if you looked at the state of the boat at 10pm last night the sailing team had their doubts. And you have to take your hat off to the shore crew who turned around a repair like I’ve never seen before, so huge thanks to the guys from the shore team. They did an incredible job.

“In terms of the racing today, it will be easy to see it as a negative day, having not scored a point – but in hindsight with our development programme and where we have come from two weeks ago, we showed great moments of speed. So, we will go in tonight, debrief, reset and come back out again tomorrow against the French.”