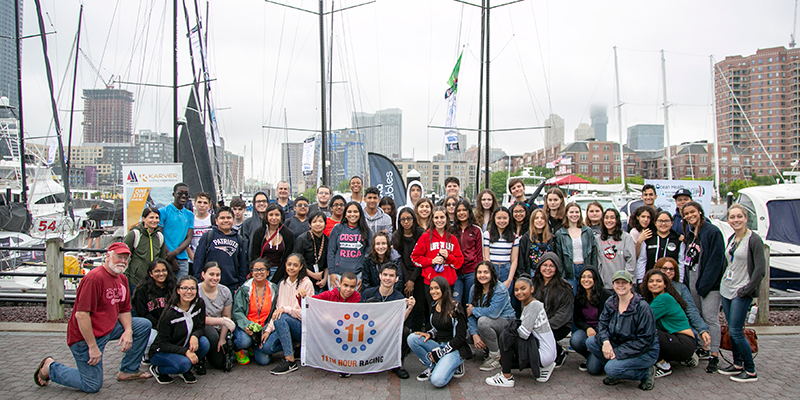 But the actual winners are likely to be the more than 2,000 students who were educated by the regattas kids program, which both went into the classroom and invited students down to the docks – to learn about sailing, marine science, and sustainability. Watch the video below to hear from the students about their experience.

At each stopover – Charleston, SC, New York, NY, and Portland, ME – students got an up-close look at the boats, the opportunity to chat with sailors, and learned about marine mammals that inhabit their coastline. The students also learned about environmental challenges facing the ocean and how they can make a difference. Lead by our 11th Hour Racing Ambassador, Dave Rearick, the Atlantic Cup Kids Program has become a day that the sailors look forward to as well.

Charleston set the record with 540 students making it down to the dock; in New York, an older group of 168 students were in attendance; and in Portland 301 students got to be part of the action – with students presenting their work on how climate change impacts lobster fishing. In addition to dockside visits, Captain Dave met with over 950 students in their classrooms before the race.

“As the official sponsor of the Atlantic Cup Kids Program, we’re thrilled to see how many students learned about sailing and ocean health in a fun and informative manner, said Todd McGuire, 11th Hour Racing. “It’s a great way to get the next generation involved, and I’m sure their parents learn a lot about sustainability when the kids get home and tell them about their day.”

Additionally, The Atlantic Cup offers downloadable lesson plans that can be used by teachers and parents alike. These include sections on geography, history, math, and environment. Click here to download the lesson plans, and for more information on the race and the kids’ program visit: AtlanticCup.org