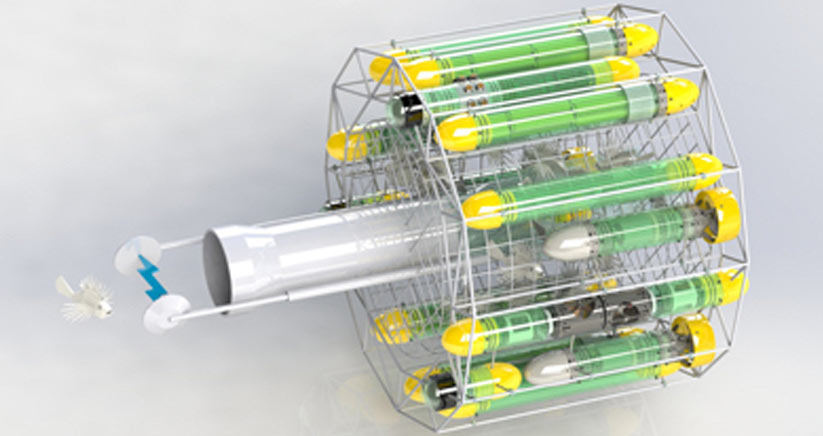 11th Hour Racing, Exclusive Sustainability Partner of Land Rover BAR, is developing a project to raise awareness about the global issue of invasive species. With Bermuda hosting the 35th America’s Cup, we are focused on lionfish.

Why lionfish? They are wreaking havoc on reefs in Bermuda and throughout the Western Atlantic from Rhode Island to Venezuela. Lionfish devour the herbivore fish that are responsible for eating algae that hinder the growth of corals, and reefs eventually are smothered and die. Coral reefs are natural breakwaters, acting as buffers against waves from storms and hurricanes – a recent study estimated that reefs in Bermuda dissipate 75-85 percent of wave energy; this is particularly important since the island is almost entirely comprised of wind-blown sand dunes cemented into limestone rock, and is susceptible to erosion from wave action. Coral reefs also provide economic benefits, supporting the tourism industry as well as commercial and recreational fisheries; the Total Economic Value (TEV) for Bermuda’s reefs represents 10-17 percent of Bermuda’s GDP.

Through the platform of the 2017 America’s Cup in Bermuda, Land Rover BAR and 11th Hour Racing are working together to raise awareness about the global issue of invasive species and are developing a celebrity chef culinary event focused on lionfish as a sustainable and delectable seafood choice. The goal is to increase market demand for lionfish and promote the development of a sustainable fishing industry in Bermuda. This event will take place on April 2017 shortly before Earth Day.

Lionfish are native to the Indian and Pacific Oceans, but believed to have been introduced into the Atlantic in 1985 by a pet owner discarding fish into the ocean. Since then, lionfish have relentlessly multiplied, invaded the western Atlantic, and now are found as far north as Rhode Island. Lionfish established themselves throughout most of the Caribbean in less than five years. According to the Bermuda Underwater Exploration Institute (BUEI), it is predicted that the invasion will keep spreading due to rising water temperatures. 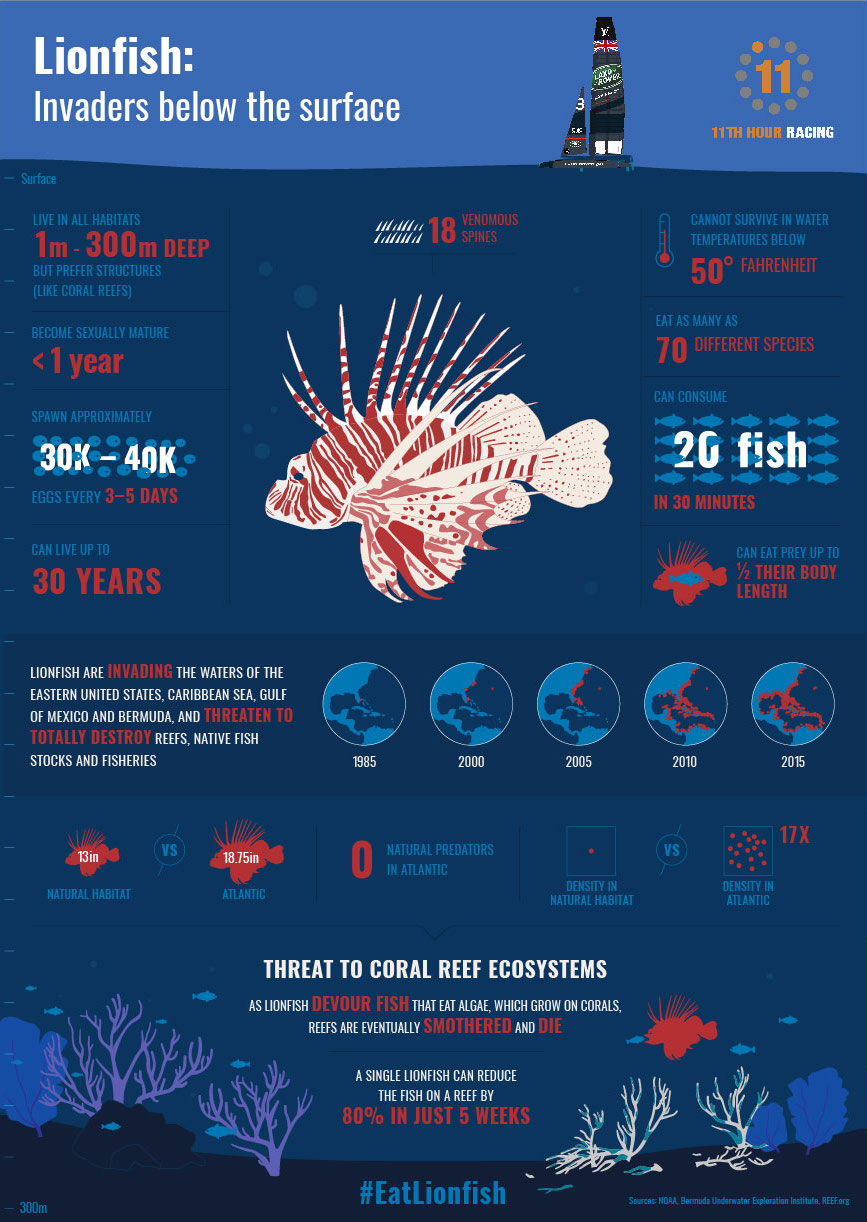 Land Rover BAR team skipper Sir Ben Ainslie – the most successful Olympic sailor of all time – and chef Rob Ruiz are teaming up to tackle the issue of invasive lionfish. They will be training together in Bermuda to learn how to hunt lionfish with spears, and will host the #EatLionfish Chefs’ Throwdown in Bermuda featuring great chefs from around the world, one representing each country of the teams competing in the America’s Cup (France, Japan, New Zealand, Sweden, UK, USA).

In addition, attendees will be able to see in action the latest innovation to mitigate the lionfish invasion, designed and developed by RISE, Robots in Service of the Environment. This non-profit is creating a Lionfish Mitigation Program based on low cost underwater Remotely Operated Vehicles (ROVs) deployed in an economically sustainable model. No type of fishing, trapping, or netting has proven to be effective with lionfish so far, especially without creating further damage to reefs and desired species. RISE is pioneering an effective solution with an ROV capable of recognizing, electrocuting and collecting lionfish, widely deployable, able to reach large lionfish populations at depths up to 1,000 feet and easy to operate without extensive training.

Chef Rob Ruiz is the chef/owner of The Land & Water Company in Carlsbad, California, and the recipient of the 2016 Ocean Award. Chef Rob, who was recently named 2016 Chef of the Year by the San Diego Union-Tribune, is an outspoken advocate for responsibly-sourced seafood and an award-winning sushi chef. He has a passion for science and people who support sustainable fishery solutions such as RISE (Robots In Service of the Environment). Flavorful and easy to prepare, Chef Rob aims to turn lionfish into an international fish sensation. Many top chefs and restaurants are beginning to serve the fish, especially in seriously affected areas, such as Florida, the Caribbean and Bermuda, and now even grocery chains, such as Whole Foods Market, are beginning to sell lionfish.

11th Hour Racing is working with Land Rover BAR, local Bermudian partners, including BUEI, Bermuda Institute of Ocean Sciences (BIOS), and Groundswell, as well as international organizations, and innovators such as Robots in Service to the Environment (RISE) and its lionfish capturing ROV, to engage and inspire tens of thousands of fans and young people through a dedicated Exploration Zone at the Land Rover BAR team base in the America’s Cup Village.