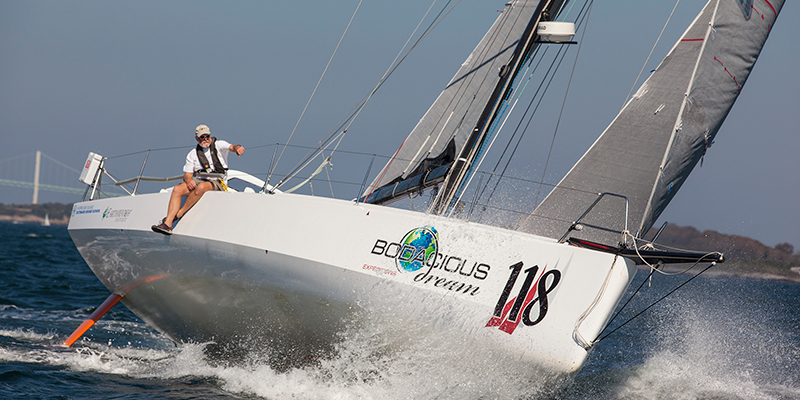 Get to know Ambassador Dave Rearick

“The journey you are on will teach you what you need to learn, not what you plan to learn.” – Dave Rearick
Photo credit: Billy Black

On October 2, 2013, our ambassador Dave Rearick set off from Jamestown, RI on an epic solo voyage sailing around the world on Class 40 “Bodacious Dream” (“Bo” for short). Two-hundred-fifty-six days later, Dave returned to Newport, RI. He recently published the book, Spirit of a Dream – A Sailor’s Ultimate Journey Around the World Alone, recounting his adventures at sea and the lessons he learned about life.

Dave permitted us to share a few of our favorite quotes from the book — highlighting his sense of adventure and his love for the ocean and sailing.

On Coping with Adversity
“NO—–! I flew through a maze of scattered obstacles to jump on deck, grab the tiller, and take Bo back through the messy jibe and steer her back on course. Now I have a serious problem—I have no autopilot and no backup. My electronic helmsman, whom I named Otto, has packed up, leaving me hand-cuffed to the tiller for the six or seven days it will take to reach Cape Town. This twitchy, fast, racing boat’s helm cannot be left unattended for more than seven or eight seconds without veering off course and careening out of control. Making the situation worse, the weather forecast for the last few hundred miles to Cape Town predicts 35 to 40-kt winds. The hard, southeast wind means awful, upwind sailing—brutal conditions with a crew of four, riotous when alone, and alone without an autopilot—ludicrous.”

On Waiting for Wind
“Over the past 40 years, I’ve often considered what it would take to float alone in the sea, or remain stranded on a mountain waiting for rescue, but I haven’t contemplated the endurance necessary to wait for wind on a calm ocean with 7,000 miles left to my destination.”

On the Joy of Being at Sea
“The beauty of sailing offshore begins when the harbor blends in with the horizon. Gradually, almost unnoticeably, the horizon becomes indistinct in all directions as we enfold with the waves and head for a place defined by a set of coordinates on this enormous, round planet.”

On Respecting Life at Sea
“During a contemplative gaze across endless miles of empty water, I am not surprised to see something floating. I am excited about the diversion and study it—the log bobbing in the water morphs into a sea turtle. I grab the binoculars and watch him pass. I look around, expecting to see another but there’s nothing out here. Realizing there is no hurry, we tack around and sail back and forth until we find him. I watch as he bobs up and down, attempting to hide by diving, though his back flipper feet are still visible, flailing in the air. It takes a while for me to comprehend his size in the vas, open ocean, but this guy is large. His head is the size of Franklin’s—a soccer ball. His flippers are as big as my hands, probably larger. I laugh, thinking he’d take up the entire cockpit, flailing, flipping, and thrashing about. In the days of yore, he would be a meal for a crew of sailors—fresh meat, fresh fluids, and soup, but not for me. I don’t fish onboard. I’m keenly aware that whatever I would catch, I could only eat a small portion, and the rest would be waste. This isn’t fair for the ocean or life in general.”

On taking care of the ocean
“I have been tired and open, forlorn and hungry, and in being vulnerable, the sea spoke to me. It asked me to see the vast endless miles without a single whale, to watch humanity flow seaward from a small town, to pick plastic from its shoulders as if picking lint from a navy sweater. And, when I wasn’t listening closely enough, it threw a cigarette lighter onto my deck, shouting at me to look around, pay attention and realize that the simplest part of the solution is us.”

Want to hear more from Dave? His book can be purchased at your favorite bookseller, on spiritofadream.com or on Amazon. Here’s the link to two recent radio interviews where he discusses his time aboard Bodacious Dream on WGN Radio and the local high school station, Porter County Perspectives, in his hometown of Chesterton, IN.