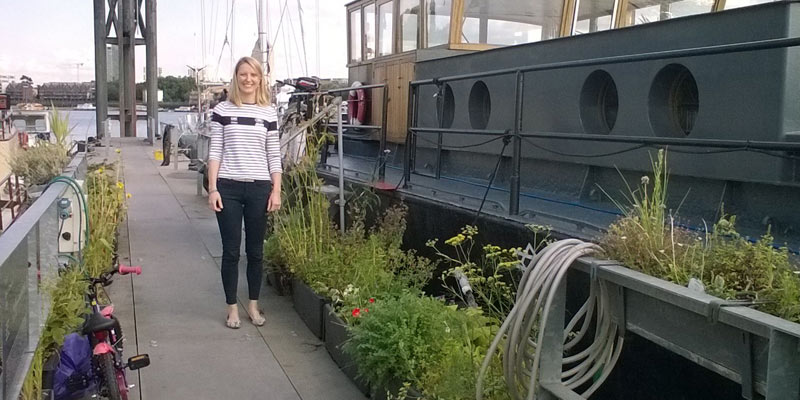 It all started in a place beyond the land, in a place where the waves lapped against the floor and the chairs swayed with the tide. A place where stories were grown and weaved into dark, deep tales of ocean wonder.

The eXXpedition Tales of the Ocean event at the Hermitage Moorings, London, brought together 12 women storytellers of all ages and backgrounds. Most of the women were crew members of the eXXpedition yacht ‘Sea Dragon’ undergoing a circumnavigation of Britain while sampling the waters for plastics and toxins. Amy Munro and I were there to represent Land Rover BAR, the British America’s Cup team. After brief introductions we all sat in a circle, inside a floating function room on the Thames, waiting with anticipation.

A professional storyteller took us through a series of coaching exercises over the afternoon. “Stories fill the room” we were taught, as she shook her rainstick to create the sound of the sea. The rhythm was hypnotic and the workshop lapsed into a oceanic dreamtime. Storytelling is an ancient art. We all are both ‘tellers’ and ‘listeners’ – each role important to the shared experience of a tale.

In the early evening a small crowd gathered for the performance. Some tales were of life-changing beginnings in Amazonian rivers, Scottish ships or Pacific tsunamis. Some tales were of long-lost myths of the sea gods. I shared a tale of a race between Cape Town and Rio de Janeiro, where my boat sailed around the bottom of a 50 knot storm while most of the fleet sailed straight into it and were decimated. Stories seem to beget more stories, and soon afterwards a young South African man from the audience jumped up to recount a tale of a father sailing off through a Cape Town storm towards Madagascar, leaving an orphan boy – him – waving goodbye on the dock. You could hear a pin drop.

The tone switched to comedy as a crew member of the eXXpedition boat re-enacted a 4 am watch on deck. She dressed herself in foul weather gear, lurching herself across the room in an imaginary swell, and climbed on deck to report for duty. All sailors in the audience were in hysterics – what makes sense on the sea looks ridiculous on the land – and every stumble due to a wave and every mimicked spew into the seasick bucket brought fresh outbreaks of knowing laughter.

The stories did indeed fill the room. And as the sun set over London Bridge and the myriad of tales were weaved, the atmosphere of the room became an intimate cocoon. The ‘telling’ became theatre and brought us all together in wondrous shared fascination. It seems that no matter which ocean we call home, we all love a good story.[/vc_column_text][/vc_column][/vc_row]