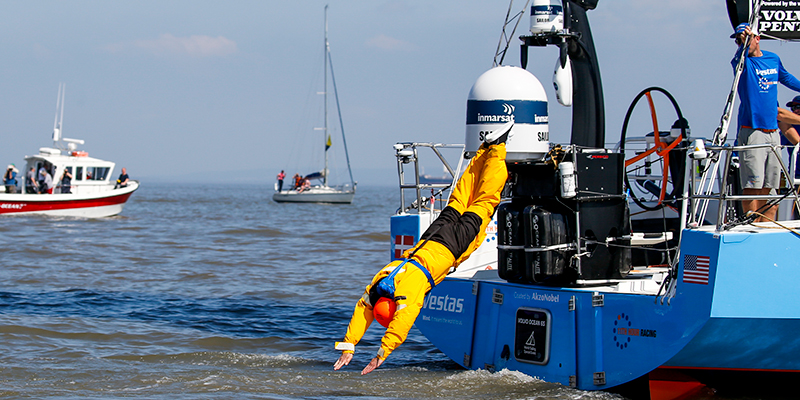 Crew members from Vestas 11th Hour Racing had a reunion, during the Cardiff stopover, with two of the people who helped inspire their sustainability journey.

The team first met scientist Dr. Robert Mulvaney of the British Antarctic Survey (BAS) in Cambridge, ahead of the Race, with the Cambridge Institute for Sustainability Leadership (CISL) where they discussed a range of issues connected to ocean health and climate change.

The scientist caught up with the team in the Welsh capital, where he was leg jumper as the boat set off on Leg 10 of the Volvo Ocean Race for Gothenburg in Sweden.

In a career spanning 30 years, Dr. Mulvaney has made 22 trips to Antarctica, traversing the Southern Ocean many times, which is the most demanding stretch of remote ocean the boats have traveled across during the Race. Sea samples, collected at Point Nemo, found levels of microplastic in this remotest part of the world’s oceans.

“Over the years, I’ve seen people change from not believing in climate change to the point where the message has gotten across – now our work is to persuade people to do something about it, either governments or industry.”

During their CISL visit last September, Dr. Mulvaney showed the team ice cores, which contain information on global temperatures, and past concentrations of atmospheric gasses – he has successfully retrieved ice cores dating as far back as 800,000 years.

“It’s really nice to get all sorts of people into the lab in Cambridge – like when the Vestas 11th Hour Racing team came into my laboratory – they saw the ice cores, they were able to listen to them, they could hear the air crackling out of the ice, this was ice that was 1,000 years old – they can sniff pre-industrial air as the ice melts.”

“It’s important to me that the message gets across – that it’s real, it’s tangible, I can take ice out of the Antarctic and measure it over and over again, and I get the same message every time. That the level of carbon dioxide is much higher today than it ever has been in the past, and that there is a clear link between carbon dioxide and climate.”

“During my career, I’ve seen the discovery of the ozone hole in the atmosphere above Antarctica, and helped find the evidence from Antarctica’s ice of the unprecedented levels of carbon dioxide in the air. Now the oceans are sounding the alarm: plastics are making their way into the ocean and food webs. The atmosphere told its story, the ice told its story, and now the oceans are telling the same story – we cannot continue to live in an unsustainable way on this planet.”

Charlie Enright, skipper of Vestas 11th Hour Racing, said, “It was hugely rewarding to revisit and reflect upon our time at the Cambridge Institute for Sustainability Leadership and the British Antarctic Survey.

“Without doubt, the training in September gave us a stronger understanding of how a sports team can ignite change around the world and that’s something we’ve put into practice as we’ve raced around the world.”

Additionally, in Cardiff, the team met again with Tony Juniper, a Fellow at CISL who kicked-off the team’s sustainability training in Cambridge. Tony re-connected with the team on the progress of their sustainability plan as they’ve sailed around the world. 11th Hour Racing marked the occasion by awarding a $10,000 grant for CISL’s Sustainability Leadership Labs, as part of the team’s on-going legacy project.

The team discussed how they put their CISL training into action and examined the wider issues connected to our seas, including plastic pollution, overfishing, warming seas, and ocean acidification

Tony Juniper added, “Talking with some of the team in Cardiff it became clear the programme has had a profound impact. They have shown leadership in the actions they’ve taken as a team and have clearly expressed individual commitment to taking action and raising awareness, which they plan to continue beyond the race to create a lasting impact.”

Vestas 11th Hour Racing co-founder, Mark Towill, added: “The impressive team at CISL and BAS broke down the incredibly vast, multifaceted, and fascinating work they do to help us understand the changes happening beneath our boat hulls. This gave us tangible actions to help meet our goal of being the most sustainable team in the Volvo Ocean Race, including reducing and offsetting our carbon footprint.”

The 11th Hour Racing grant to CISL will provide funding for up to four applicants working in not-for-profit organizations in the marine and ocean health sectors to attend CISL’s Sustainability Leadership Labs.

The Labs are two-day courses offering a deep dive into topics primarily shaped around the themes of circular economy and leadership – topics that have been explored during the Volvo Ocean Race Ocean Summits.