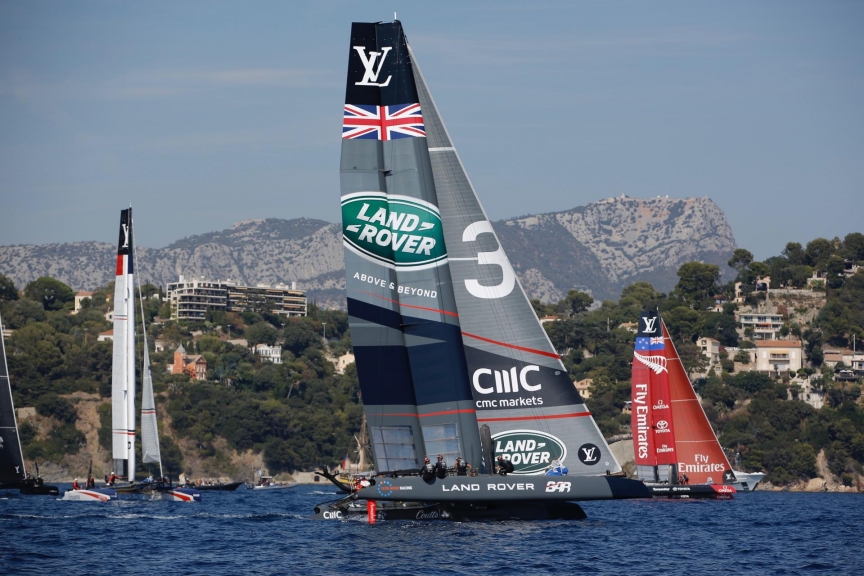 The Land Rover BAR crew proved themselves rock steady under immense pressure on Super Sunday at the Louis Vuitton America’s Cup World Series event in Toulon. They now lead the overall series by fourteen points going into the final event of 2016, after scoring a third place this weekend.

It was more of the same conditions today, light shifty winds under brilliant blue skies made the tacticians and helmsman sweat for every point. Ben Ainslie and his crew scored a brilliant wire-to-wire win in the second race. They were forced to make remarkable recoveries however – to finish third and fourth – after pre-start penalties in the other two races. More significantly, both of the teams chasing them in the series were deeper in the rankings.

The third at this penultimate event pushed Land Rover BAR out into a significant overall lead for the World Series. The team now have a 14pt advantage over the America’s Cup defenders, Oracle Team USA, with Emirates Team New Zealand a further three points back. The final event will be in Fukuoka from November 18-20, 2016.

Thoughts on the day

Ben Ainslie, Team Principal and Skipper; “All credit to the team, it was a big improvement on yesterday and it needed to be for those double points on the Sunday. It was a good day for racing, a better breeze than yesterday. We would have liked to have got closer to winning – I think Artemis sailed really well – but to increase our lead in the World Series going into the final event in Japan in November is a big deal for our team.

“There was slightly less emphasis on the tactical and strategic today, but there are still a lot of decisions to be made and Giles [Scott] really helped me out. Also, Rob Wilson and Luc du Bois our coach and analyst really helped to set us straight, and that’s really positive for the whole team looking forward to the Cup next summer.

“We are going to go into the last event in Japan with a reasonable lead of fourteen points. Oracle Team USA and Emirates Team New Zealand are our primary rivals, so I don’t think we can take anything for granted. We are going to have to sail well to keep that lead, and that’s what we are really focused on – getting those bonus points heading into the Cup next year.

“We shouldn’t forget that there is a lot going on back in Portsmouth. Our designers and boat builders are working extremely hard. This is a critical testing phase for us, so that will be the primary focus now. When we get closer to Japan, we will get our mind set right for racing again.

Giles Scott, Strategist: “It was a weekend of two halves as we struggled in the first two races yesterday, before we pulled it back to win the last one. We went back last night and had a long debrief to look at how we were sailing on the water. We didn’t want to panic too much, but we tweaked a few things and actually today was a lot better and we were sailing fast and in the right direction.”

Paul ‘CJ’ Campbell-James, Wing Trimmer: “We didn’t start that well but the great thing is the way we have bounced back after those two last places. I think we actually scored the most points today, which shows how much we improved. We have extended our lead over Oracle Team USA – now the focus is Japan and making sure we have a high level of performance out there.” 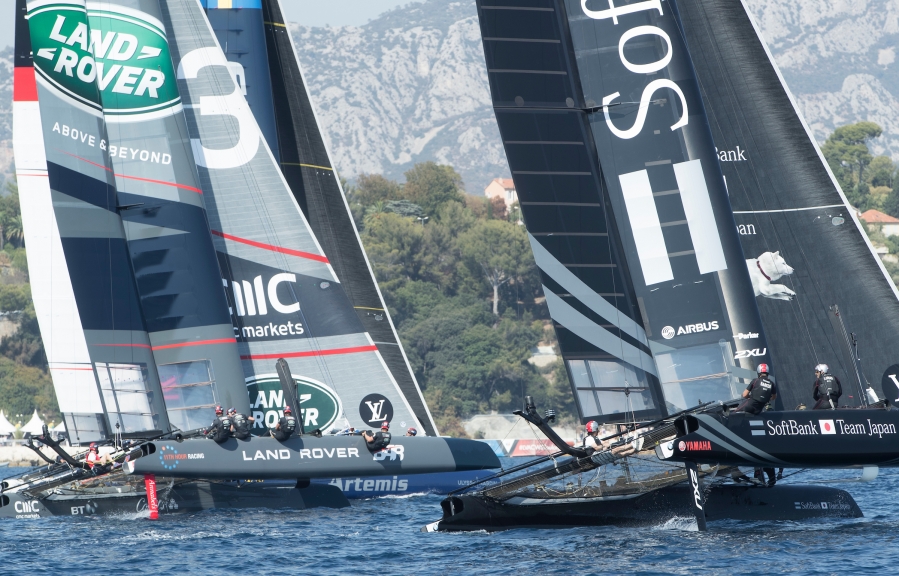