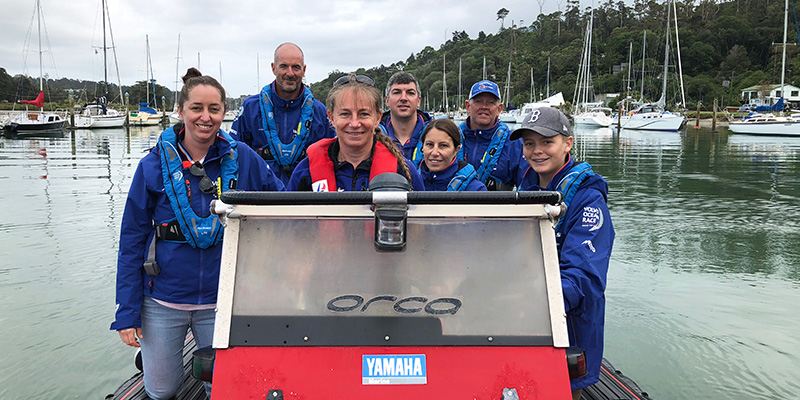 Ahead of the start of Leg 7 of the Volvo Ocean Race from New Zealand to Brazil, Vestas 11th Hour Racing team members gathered at the Weiti River, just outside Auckland, to spend the morning exploring the estuary as Dr. Visser explained Orca Research Trust’s work. A few years ago, Tony Mutter watched a documentary on a flight home to New Zealand called Swimming with Killer Whales. Dr. Ingrid Visser captivated his attention – but the connection between pollution on land and how it impacts the ocean was what hit home.

“Watching the documentary taught me a lot about water run-off, from farms, and how it enters the ocean and affects wildlife,” said Tony Mutter, Crew Member, Vestas 11th Hour Racing. “I hope our support of Orca Research Trust, and will help raise awareness on the importance of changing our habits on land to protect the ocean.”

While there are currently fewer than 200 Orcas in New Zealand waters, the iconic marine mammal is revered by the Maori, the indigenous people of New Zealand, and are often spotted in harbors and along the coast. The Orca Research Trust, founded by Dr. Visser in 1998, was the first scientific research project to study orca in New Zealand waters and remains so to this day. Dr. Visser’s work at the Orca Research Trust has also led to having a much better understanding of the toxins present in Orcas that live in New Zealand waters. Orcas around the world have adapted to eat prey that are abundant in their region, and for the Orcas of New Zealand, this includes eating rays, bottom feeders that are commonly found close to shore and in busy industrial harbors. As large animals eat smaller species, they accumulate toxins (such as heavy metals like mercury and environmental contaminant such as PCBs) that their prey has absorbed. Orcas are particularly at risk as they eat animals that are also at the top of the food chain such as sharks. Dr. Visser, having seen the issues first-hand, has campaigned to reduce chemicals entering into the watershed.

“My fascination with orca has led me to better understand how connected we all are to the ocean. Chemicals used on farms and oil leaking from a car parked in the street, these are just some of the examples where there can be an impact downstream, literally and figuratively,” said Dr. Ingrid Visser, Founder & Principal Scientist of Orca Research Trust. “If we make small changes in our own lives, we can have a marked effect on the health of the ocean and all the creatures that live in it, not to mention us, who use and enjoy it.”

Beyond researching and observing these magnificent creatures, the Orca Research Trust also focuses their work on education and awareness. New Zealand has the highest stranding rate of Orcas worldwide, averaging one per year – in Australia, which has a much longer coastline, Orca strandings are recorded approximately once every 14 years. Dr. Visser believes New Zealand’s high rates, to be due to hunting rays, which often forage in shallow waters. She has worked to study the recovery of Orcas that are successfully returned to the water after a stranding, while also raising public awareness for swiftly reporting strandings so these fascinating sea mammals can be returned to the water.

“One of the most satisfying parts of my research is to have a successful rescue of an Orca – to see it return to its family” Dr. Visser stated.

“I am very passionate about educating the sailing community about how they can help protect cetaceans, and it was an honor to spend the day with Dr. Visser on her iconic red RIB and learning about her work,” said Damian Foxall, Sustainability Manager, Vestas 11th Hour Racing. “This is a wonderful opportunity to link between sustainable land management and the effect it has on our freshwater systems and oceans – wherever we live we are all ocean citizens.”