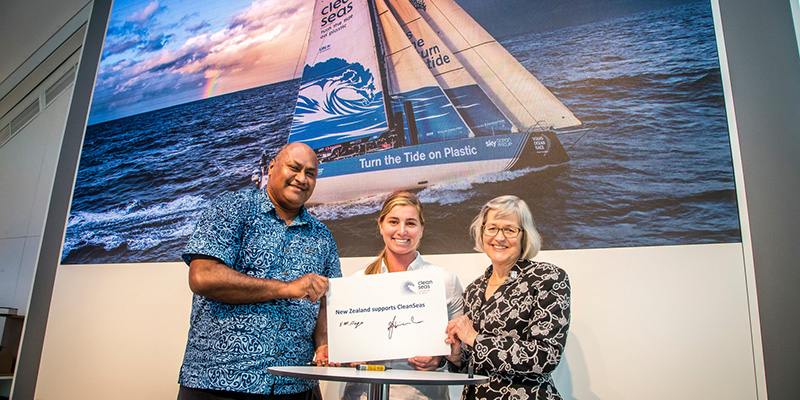 “Turtles and other wildlife are being killed by litter in our oceans. Also, the issue of microplastic in our oceans and its effect on the food chain is a concern for all species and is a potential risk to human health. New Zealand is proud to be joining this campaign to stop this from happening,” Ms. Sage said.

“I would like to congratulate the New Zealand Government on joining the United Nations-led CleanSeas campaign to address the impacts plastics are having on our oceans,” he said. “By individuals, businesses, NGOs and governments, such as New Zealand’s, working together we can find innovative solutions to educate, innovate and leave a lasting legacy that will help address this plastic problem.”

11th Hour Racing is proud to be the Founding Principal Partner of the Volvo Ocean Race sustainability program. It’s Program Director noted at the event “When we first became a sustainability partner for the race it was all about impact, we knew that it would be possible going to 12 different stopovers and have the Clean Seas pledge be the campaign for the race.”

Measures included in New Zealand Commitment to the pledge:

Watch the video below to get a behind the scenes look at the pledge signing!