Jack Johnson has partnered with the Volvo Ocean Race and 11th Hour Racing to fight ocean plastic pollution by taking the #CleanSeas pledge.

The musician, who has sold over 25 million albums worldwide, became a UN Environment Goodwill Ambassador on World Environment Day in 2015. The role aligns with his commitment to raise environmental awareness in the music industry and to encourage venues and fans to reduce plastic waste. His social action network, All At Once, connects concertgoers with local non-profits at every show.

In March, Jack participated in the closing panel at the 6th International Marine Debris Conference in San Diego, California, joining experts and leaders to discuss the global effort to tackle plastic waste. Recorded on site at the conference, Jack appears in this video, and speaks about the value of the ocean to his family and how that has inspired him to take action: “The ocean has always been a really big thing in our life, we grew up surfing, we grew up sailing with my dad, we grew up always in the ocean.”

Recently the Volvo Ocean Race Science Programme announced data that found microplastic in the most remote places in our ocean. It is estimated that around eight million tonnes of plastic are dumped into the sea every year.

Jack Johnson continues: “And now when you go to the east shore of Oahu it’s predominantly plastic. At some point, I realised that I couldn’t just keep stepping over it and go enjoy myself in the ocean. As a dad, as somebody who got so much out of the ocean my whole life… you get to a place where you have to do something about it.”

“By taking the #CleanSeas pledge and reducing his own plastic footprint whilst on tour Jack sends a clear message that we all need to take action in our own lives to stop plastic from entering our seas.”

Since 2005, Jack Johnson’s production team has been at the forefront of the green touring movement, applying eco-friendly solutions to tour production and encouraging venues to adopt lasting sustainable practices. As part of his current All The Light Above It Too tour, waste reduction measures have been expanded with on-site water refill stations and the elimination of single-use plastic water bottles backstage. The tour is working with venues to eliminate plastics straws and promote Reusable Pint Programs, providing fans with an alternative to disposable plastic cups. Johnson is also promoting the short film, The Smog of the Sea, which makes an artful call to action for rethinking single-use plastics.

Join the movement to stop plastic pollution and sign onto the #CleanSeas pledge. 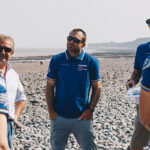