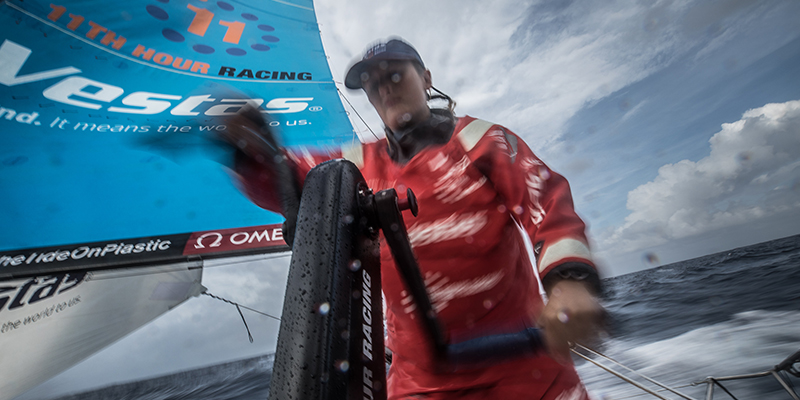 Take 3 for the Sea

During the Volvo Ocean Race Melbourne stopover team members met Tim Silverwood, co-founder, and CEO of Take 3 to learn more about their simple call to action that everyone can join – Take 3 pieces of rubbish with you when you leave the beach, the park, the waterfront or anywhere! Additionally, 11th Hour Racing will give Take 3 a $10,000 grant as part of a legacy project with the Vestas 11th Hour Racing partnership. This grant will support Take 3’s education programs that have reached over 120,000 school students and over 150,000 community members since 2011.

“I really enjoy the simplicity of Take 3’s mission while tackling what can be a rather scary topic,” said Mark Towill, Co-founder and Team Director of Vestas 11th Hour Racing. “With an estimated 8 million tons of plastic entering the ocean every year, it is easy to get discouraged, but programs like Take 3 use simple action to inspire hundreds of thousands of people, which can lead to profound impact.”

To help grow this global initiative and be active players in mitigating the issue of ocean pollution, the sailors of Vestas 11th Hour Racing have created a video to encourage their fans to join them!

“Take 3 are pleased to be recipients of this grant and are thrilled to see the global attention that Vestas 11th Hour Racing and the Volvo Ocean Race are providing to the plastic pollution issue. It was wonderful to meet the team and learn of their passion and commitment for ocean conservation. Jumping off the back of the vessel as it sped towards Melbourne Heads was an experience I’ll never forget! Take 3 will utilize funds to fuel our education programs in schools, communities and online.” Tim Silverwood, co-founder, and CEO of Take 3.

Join the Global Movement
The team is encouraging its fans around the world to join this movement by giving away some team swag!

How to enter?
Get outside, pick up 3 pieces of trash before it can get to the ocean – then snap a pic and tag it with #Take3fortheSea and #Vestas11thHourRacing before the team reaches Hong Kong for a chance to win!

Lasting Legacy
At each Volvo Ocean Race stopover, Vestas 11th Hour Racing will be meeting with a local non-profit to learn more about its environmental work. 11th Hour Racing will be giving a $10,000 grant to each of these non-profits as part of its mission to leave a lasting legacy beyond the race. Previous grant recipients are:  Asociación De Naturalistas Del Sureste in Alicante, Spain, Circular Economy Portugal in Lisbon, Portugal, and Environmental Monitoring Group in Cape Town, South Africa.