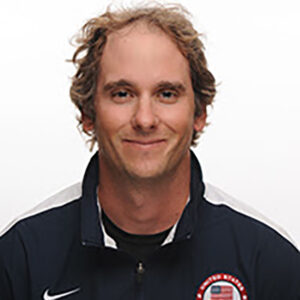 World Champion
in the J-24 class

Sail1Design/Sailing Anarchy
Coach of the Year

Having a presence at regattas as 11th Hour Racing creates incredible awareness about what we can all do to make our waters and environment a better and cleaner place.

John Mollicone, Boston University ’98, has been the Head Coach of Coed and Women’s Sailing at Brown University since 1999.  John was an All-American Skipper at Boston University in 1998, is a two-time World Champion in the J-24 class, and has won more than a dozen North American, National, and Midwinter Championships in multiple one-design classes. In 2010, John was awarded the U.S. Sailing National Sportsmanship Award for the Van Alan Clark Trophy. He was a member of the 2011 U.S. Sailing Team, winning a Silver medal in J-24’s at the 2011 Pan-American Games in Puerto Vallarta, MX. John was named a U.S. Sailing Rolex Yachtsman of the Year Finalist in 2012 and was recently named the 2020 Sail1Design/Sailing Anarchy Coach of the Year. John currently lives in Cranston, RI, with his wife Holly and daughter Ava (almost 2 years old).

WHAT INSPIRED YOU TO BE AN 11th HOUR RACING AMBASSADOR?

I spend nearly every day of my life on the water either coaching or racing, so obviously I am very passionate about sailing and the waters we sail on. I always try to do my part and encourage and ask others to do the same every time I am near the ocean, lakes, and seas. Everyone needs to contribute to making our waters and shores a cleaner and better place.

I am always trying to spread the message about sustainable living to the College Sailing World, and at the clinics, I coach, such as the Sail Newport Advanced Racing Clinic in memory of Brook Gonzalez. On our team at Brown University, we are now recycling our old sails and having bags made as gifts for alumni and parents, and we are continually donating our old boat parts to programs in need. Through a grant from 11th Hour Racing, I am currently working with the East Bay Sailing Foundation in Bristol, RI on an electric outboard engine on a coach/race committee boat for their program and for some college sailing coaching. I am really hoping that electric engines will become more affordable and the technology will get to the point where they will become the norm for all coach boats, safety boats, and race committee boats in the near future.

Investing in our planet is an investment in our future, because when the ocean wins, we all win.

He carried a message of awareness about the conservation of the world’s glaciers and the value of water.

Yago Lange is taking his passion on the road to share his love of the ocean and meet others with that same passion. 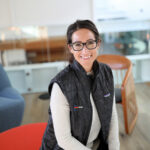 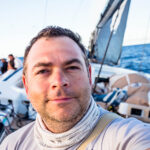