The 52 SUPER SERIES Sets its 2020 Vision for Sustainability

An exciting season of intense 52 SUPER SERIES has just opened in Cape Town, South Africa. Consolidating progress, building on momentum, and continuing to engage and influence at all levels is central to the 2020 52 SUPER SERIES sustainability campaign.

The world’s foremost grand-prix monohull racing circuit will continue to generate pragmatic positive messages, which, as we have seen in recent years, positively influence and strongly engage the sailing community – be that the global fanbase that follows the racing, the teams and the individual sailors, or the local host communities at each venue. As highlighted in the 2019 52 SUPER SERIES Sustainability Report, last season’s campaign was extremely successful, ushering in many new ideas and takeaways. This coming season is about encouraging everyone to take the next step and build upon what has already been achieved.

The 52 SUPER SERIES has worked hand-in-hand with sustainability sponsors 11th Hour Racing for more than five years now, the two organisations growing and learning together to become world-renowned references.

“Over the past five years, 11th Hour Racing has seen its innovative perspective inspire the growing adoption of sustainable practices across the fleet,” says Jeremy Pochman, Co-Founder & CEO of 11th Hour Racing. “From humble beginnings and a single team eliminating plastic water bottles, event organisers now reference the Global Reporting Initiative’s international sustainability reporting framework, offset much of its carbon footprint, hosts underwater and beach cleanups, and has maintained ISO certification since 2017. The series is weaving this into a unique story for every sailor, every person playing a part in finding solutions to the challenges facing the ocean.”

Chief Sustainability Officer Lars Böcking responds: “When we started with sustainability back in 2015, we were the odd ones out. People weren’t really talking about single-use plastics or carbon footprints. Today, the whole thing has evolved into a global movement. Sustainability is a lifestyle, and it’s wonderful to see.”

11th Hour Racing Ambassador and Quantum Racing Coach Tom Burnham reflects on the 2019 52 SUPER SERIES season as the 2020 vision for sustainability kicked off.

The 52 SUPER SERIES circuit considers the principal sustainability focus areas to be waste, water, food, transportation, branding, cleaning and energy consumption. There is an ongoing portfolio of sustainable initiatives that touch on each of these areas and encompass changes to the traditional operational model involving organisation staff, teams, host venues and suppliers.

Against this backdrop of action, the 52 SUPER SERIES will build upon its own lessons learned, and the growing awareness of the big-picture global climate happenings, such as #FridaysforFuture, the changing nature of the Amazon basin, the storms and flooding in Europe and the devastating bush fires in Australia.

For the 52 SUPER SERIES, 2020 will be about continued education and reinforcement of the key issues facing our planet as the urgency for change becomes ever more acute. The full scale reduction in the use of all plastics is essential. The myth prevails that recycling is the easy answer to plastic disposal, sometimes excusing the ongoing use and production of the harmful material, but in reality, both the production and the energy required to recycle plastics is damaging to the environment, and many “recycling schemes” are not as traceable or transparent as they should be.

Reflecting the need to reduce food waste globally, the circuit aims to work with NGOs at each of the six venues this year to ensure that unused food is immediately passed to those less fortunate. The 52 SUPER SERIES encourages other sports events, large and small, to follow suit.

Most immediately, the circuit opens this week in Cape Town, South Africa and in so doing a whole new set of challenges and opportunities are ushered in.

The Plattner family’s Team Phoenix are hosts in Cape Town and they remain one of the driving forces in environmental awareness and sustainability. The family runs the Odzala Discovery Camps in the Congo Basin raising awareness about the fragile ecosystems in one of the last wilderness areas in the world. Their globally renowned conservation projects there are helping to preserve and sustain endangered species, whilst at the same time allowing very few individuals the opportunity to visit and experience these wilderness areas in a low-impact, eco-friendly way.

Closer to home, a community engagement event was held on last Saturday. Ergin and Nazli Imre and their Provezza team hosted a group of youngsters from the Skipper Foundation who travelled 400km to visit the regatta, get on board the TP52s and learn more about sailing.

The mission of the Skipper Foundation is to teach and develop sailing skills for vulnerable youth groups from underprivileged communities. They achieve this through sponsored training courses presented by volunteer experts. The sailing environment sets the platform for young people to learn technical and soft skills as well as commitment, discipline and ethics, which prepare them for national and international employment opportunities in the marine industry.

And during the second Cape Town regatta, the Rolex TP52 World Championship, there will be a fun participation event involving all the crews in multiple watersports and sustainability-related activities, all in lighthearted atmosphere, while raising funds for the Skipper Foundation.

Just as the sporting level of the 52 SUPER SERIES is one of the highest in the world, so too the 52 SUPER SERIES strives to give a lead as positive influencers, engaging locally, nationally and globally. The 2020 season is about taking the next steps and building on the significant momentum achieved to date.

⛵Two weeks until the start of the @transatjacque

#Choosemagic by recycling oyster shells instead of

For #worldfoodday we've got oysters on the brain.

Counting down to the @transatjacquesvabre on Novem

🚨 Tag someone that should apply to the @worldsa

Mālama will be competing in its first transatlant 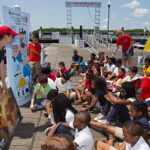 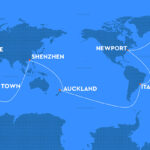