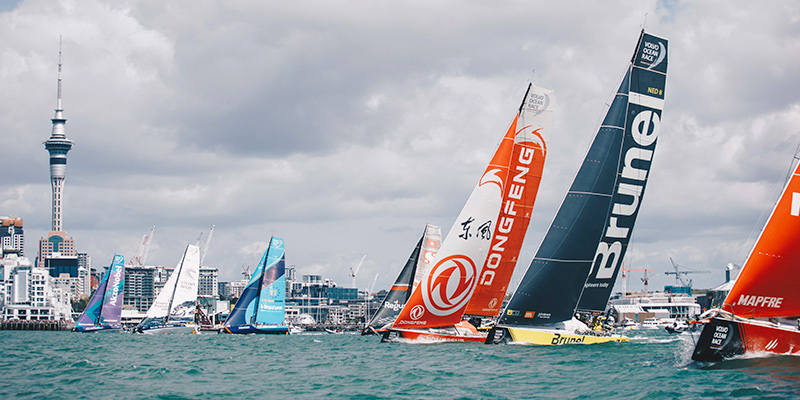 The Ocean Race has won two BT Sport Industry Awards, earning recognition amongst some of the world’s biggest sporting brands and organizations by scooping the Cutting Edge Sport Award and the Social and Sustainable Development Award.

The sustainability campaign from the 2017-18 edition of The Ocean Race, with a focus on reducing the amount of plastic entering our oceans, was crowned “best in class” and a “shining example” by judges.

The Social and Sustainable Development Award was presented by former British Prime Minister Tony Blair to Dee Caffari at a star-studded ceremony in London on Thursday evening, where the campaign to turn the tide on plastic, which reached millions of people during the record-breaking 2017-18 edition of the race, was recognized for the breadth of its impact.

The award judges agreed that this was a shining example of best in class work noting that The Ocean Race used its scale, partnership family and data collection to drive the public affairs agenda, leaving a demonstrable and compelling legacy.

Richard Brisius, co-president of The Ocean Race, said, “We used our influence and platform to inspire millions of people through a nine-month global sporting event and we’re honored to have been recognized for the impact of this groundbreaking campaign.

“By engaging politicians and business leaders to implement change to policies and practices to address the ocean plastic crisis, we sought clear, long-term commitments for cleaner, healthier seas and are proud to have left a lasting legacy.

“Sustainability is integrated within The Ocean Race’s DNA and we have pledged to use the momentum we have built as a catalyst to continue our mission to restore ocean health.”

The Ocean Race recently announced 11th Hour Racing, the founding partner of the sustainability programme, would return for the next edition of the race as a Premier Race Partner.

Bluewater also confirmed it will return as the official drinking water provider, in a bid to reduce global reliance on single-use plastics, building upon the work already started.

British sailor Dee Caffari acted as an ambassador for the campaign and skippered the Turn the Tide on Plastic race boat, which not only carried the vital message around the world but also acted as a racing science lab collecting never-before-seen microplastics data from the most remote oceans on the planet.

The Judges for the Cutting Edge Sport award said they “admired the advanced use of technology to enhance the media coverage of sailing, making it a more immersive and accessible sport.”

The Ocean Race submitted live social-first coverage and ‘RAW’ storytelling from the Race – highlighting firsts such as live drone footage of racing in the Southern Ocean as key successes.

“In the last edition of the Race we placed a big emphasis on delivering compelling, raw content to our fans in real-time whenever technically possible,” said Johan Salén, Managing Director of The Ocean Race.

“This proved to be the best way to engage with our fans even when our race boats are many miles offshore in the clutches of the Southern Ocean – closer to the astronauts than anyone else on land. As a result the storytelling from the race track was very authentic and powerful.”

“We are delighted to see The Ocean Race win the Social and Sustainable Development Award for the incredible work done with the sustainability programme, we are proud to be the founding partner of,” said Rob MacMillan, Co-founder of 11th Hour Racing. “Furthermore, we are excited to continue and deepen this work for the next edition of the Race.”

The next edition of The Ocean Race is scheduled to start in the autumn of 2021 from Alicante, Spain.