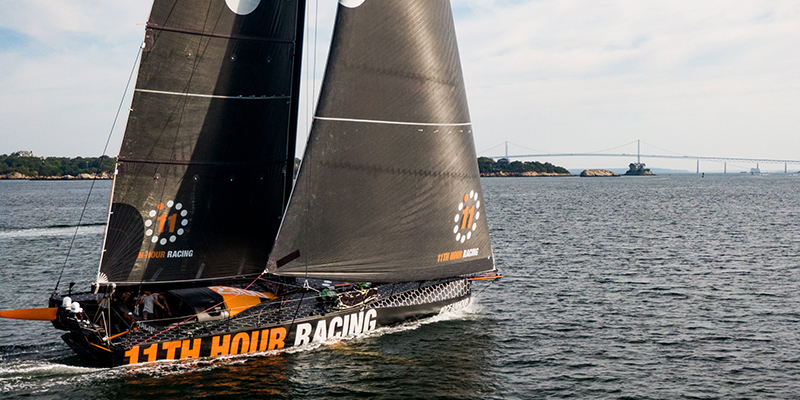 After 13 days at sea, 11th Hour Racing Team have arrived home to Newport, RI after a successful delivery from Concarneau, France. Their refurbished 60-foot monohull, skippered by Charlie Enright (USA), slipped into Fort Adams just after 0830 ET this morning.

The Atlantic crossing has been a dual opportunity for the team to test the boat and new foil after an extended refit in France due to the COVID-19 pandemic, as well as support two scientific projects onboard.

“That [the crossing] was a reminder of what crewed life is like on board an IMOCA 60!” commented skipper Charlie Enright as he docked at Fort Adams. “Going from east to west in the Northern Atlantic at this time of year is like watching a parade, but walking against it! Everything comes at you pretty fast, you experience twice as much weather than if you were going in the other direction, with a series of fronts and ridges from 0-35 knots [0-45 mph] and constantly sailing shifts upwind. It was really uncomfortable at times due to the wind conditions and sailing at very tight angles: we will need to figure out how to make the liveability onboard comfortable for extended periods of time with six crew.

“It’s always a great feeling to arrive safely in port, but extra special to be coming home here to Newport,” he continued. “Not only is it where I grew up, it’s also the home of our sponsor, 11th Hour Racing, so looking forward to sharing with them the developments on the boat. We plan to be here for the next few months. It will be a chance for us to spend some time sailing in home waters and also re-connect with the local communities here in Rhode Island after a long period away in Europe.”

As well as testing the new foil, the team also supported two scientific projects during the crossing. While passing over the Newfoundland Grand Banks, the sailors deployed an NOAA (National Oceanic and Atmospheric Administration) weather drifter buoy. The data sent back will be used for the Atlantic and European weather models utilized by mariners, and provides scientists with data on the effects of climate change on ocean health, measuring sea surface temperature and barometric pressure. The team also carried a water sampling device for The Ocean Race, called an OceanPack, which samples seawater to measure CO2 levels, sea surface temperature, and salinity.

The team will remain in Newport and train out of Fort Adams over the coming months.