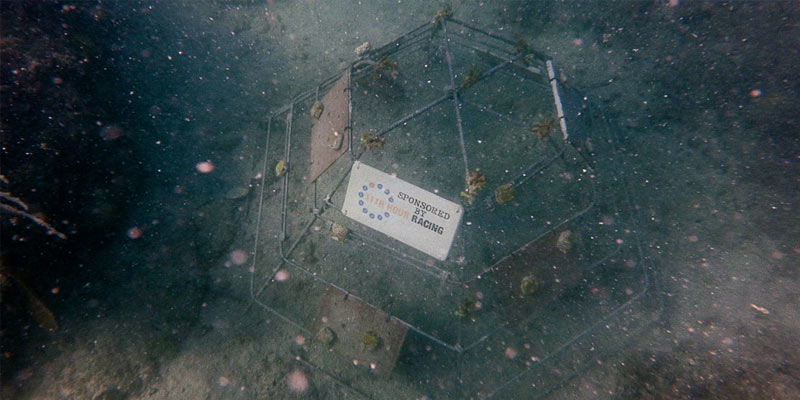 Exciting things are happening with the 11th Hour Racing coral garden we adopted from the Living Reefs Foundation in Bermuda!

The 11th Hour Racing coral garden is well placed and the existing coral plantings are doing well, hence it is now being used to test new methods of coral re-growth known as “fusion.” This method adapts David Vaughan’s techniques that are testing the growth and fusion of boulder coral fragments on Bermuda’s reefs. The concept is that planting a tile or part of a garden with fragments of one colony (as opposed to several colonies) will grow more quickly and fuse into one larger colony in a shorter period of time, than if planting a tile with fragments of different colonies. The Living Reefs Foundation is testing this technique with Diploria (brain coral), Montastrea (star coral), and Porites (mustard hill coral).

The coral garden project has been garnering a lot of interest from various schools and summer groups in Bermuda. Dr. Samia Sarkis, Managing Partner of the Living Reefs Foundation, gave a talk to Year 3 classes at Warwick Academy the last week of June, this included a show and tell with coral garden models, bleached corals, live corals, and a tile of young corals (or mini-garden).

The Living Reefs Foundation is also giving snorkel tours of the coral gardens to summer camps of the Bermuda Zoological Society. Each camp group has approximately 12 children (ages 10-12), who can see first-hand the work that is being done to restore the coral reefs in Bermuda; the campers learn how the Living Reefs team of scientists records important data on coral growth, algae cover, and fish populations on and around the coral garden structures.