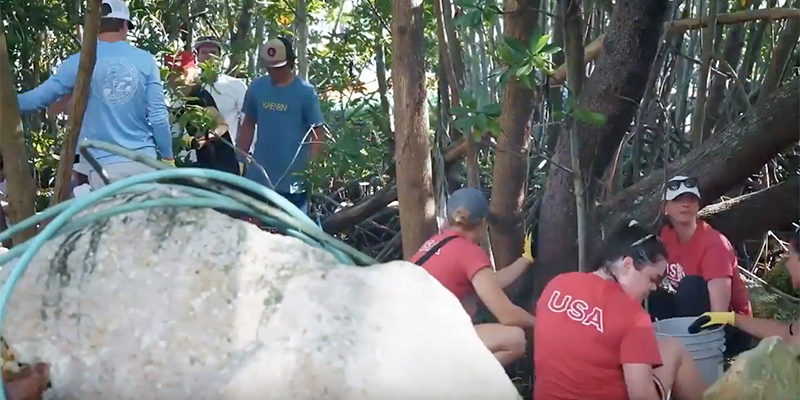 To mark the beginning of a new year, the US Sailing Team (USST) athletes are attending a five-day training camp at the US Sailing Center in Miami, Fla. The team will participate in classroom and on-the-water training sessions to prepare for the upcoming year of competition.

On Sunday, January 14th, the USST and Olympic Development Program athletes were joined by local and foreign sailors and volunteers who participated in the US Sailing Coconut Grove Coastal Clean-Up. The event was organized by US Sailing in partnership with VolunteerCleanup.Org and was sponsored by World Sailing. Upwards of 100 individuals collected over 850 pounds of trash from the mangroves lining Kennedy Park and Prime Point Marina.

While the sailors and volunteers dragged a few large objects from the water, a significant portion of the trash collected was made up of microplastics (plastic fragments about a square centimeter or less in size). These included fragments of plastic, straws, and bottle caps.

Thanks to a grant from 11th Hour Racing to eXXpedition — a series of all-female voyages focusing on the ocean plastics issue – the USST athletes also took part in a workshop specifically designed to help identify how to become ‘change makers’ and reduce plastic pollution. Led by eXXpedition co-founder and ocean advocate Emily Penn, the workshop prompted the athletes to brainstorm about the origins and implications of ocean microplastic pollution. “What’s happening is that most of this plastic is breaking down into small fragments when it gets out to sea. The UV rays of the sun, the waves, and the wind break big bits into small fragments, but the plastic is not biodegrading. It’s not going back into the natural cycle. It’s simply getting smaller, harder to see, and much harder to clean up,” explained Penn.

The sailors also learned new ways to serve as ambassadors to the environment. USST athlete Caleb Paine shared a common practice that may be an opportunity for change, “There’s a lot of times that we’re in the boat park and say, ‘whatever, there are holes in this stuff,’ and we throw [apparel or equipment] in the garbage. If you’re conscious that there are other options out there, obviously that’s a better choice. A lot of times, you just have no idea that there’s another choice.”

The training camp will run through January 17. After a few short weeks, the team will reconvene at the 2019 Hempel World Cup Series Miami. Racing is set to begin on January 28 and will conclude on February 3. At the event, here US Sailing and the US Sailing Team will continue to prioritize sustainability. For more information regarding sustainability practices at Hempel World Cup Series Miami, click here.

Learn more about US Sailing, the US Sailing Team, and Hempel World Cup Series Maimi.