“There’s a lot of great women in the industry, and I have sailed with some of them and wanted to sail with some of them and hadn’t been able to yet,” Jackson said. “As I looked around on the Volvo boats and at the positions the women were doing, I realized that if you put them on one boat we’d have the skills to cover all aspects of racing at the highest level. So why not put them all together and do a Hobart with them? A lot of these people are my picks for that position, and it just so happens they are female.”

The team arrived at the dock in Hobart after two days of racing greeted by media, fans, and despite having very little sleep, still ready to talk about plastic pollution and their mission to raise awareness on the need to restore ocean health. Watch the video below to hear from the team.

To learn more about the team’s efforts to raise awareness of plastic pollution with Clean Up Australia, click here. 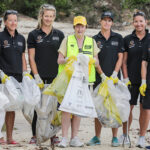 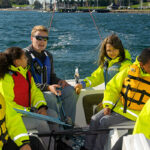