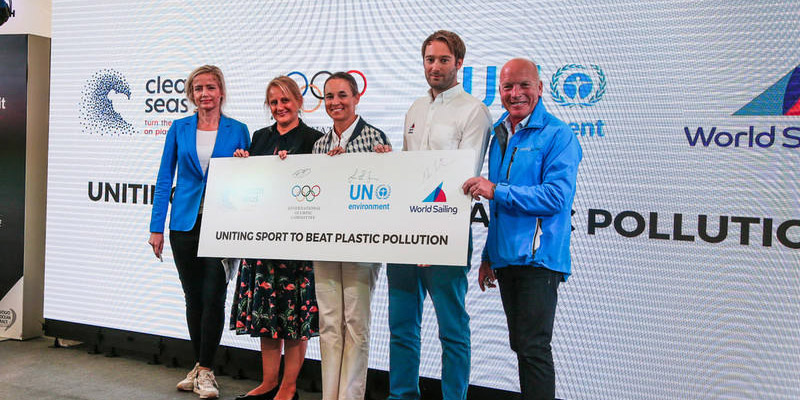 The Volvo Ocean Race Ocean Summit in Cardiff started with a buzz of celebrity videos on World Environment Day.

As the audience found their seats, guests enjoyed a video featuring Jack Johnson sharing his support of the UN Environment #CleanSeas pledge. Next up HRH, Prince Charles, also joined the event via video, he noted, “These Ocean Summits that bring together the worlds of sport, industry, government, science and ocean advocates, are a vital part of the collaborative steps that are being taken to tackle the ubiquitous pollution of the ocean with plastic debris as well as the broader threats to the oceans health.”

Tony Juniper CBE, Executive Director for Advocacy and Campaigns at WWF started the morning off by setting the scene on the vital importance of ocean health to humanity, noting, “If we grow the health of the ocean we grow the health of humankind as well.” The Vestas 11th Hour Racing team was lucky enough to spend the afternoon with Tony Juniper the day before, discussing their sustainability efforts and what they’d learned since he first helped the team understand global ocean health challenges at the Cambridge Institute of Sustainability Leadership.

Experts from Cardiff University and Plymouth Marine Laboratory, along with Dee Caffari skipper of Turn the Tide on Plastic discussed the gaps of our understanding of plastic pollution from a scientific perspective.

11th Hour Racing grantee, Emily Penn spoke on a panel discussing the importance of ocean innovation, and she was officially named a Sky Ocean Rescue Ambassador. On the same day, Emily was also awarded the Points of Light award, by Prime Minister Theresa May, which recognizes outstanding volunteers who are making a change in their community and inspiring others.

Mark Towill, team director for Vestas 11th Hour Racing was honored to be on stage with the sustainability managers for World Sailing, the Volvo Ocean Race, and the International Olympic Committee. He also shared his passion for protecting the ocean from growing up in Hawaii. “Plastic pollution isn’t a new topic for me; it’s something we have been dealing with in my home state of Hawaii for years. However, the concept of conscious consumption has opened my eyes. With information and awareness comes power – and we hope by using our platform to raise awareness, our fans will be empowered to make changes in their lives and communities.”

The summit was rounded out with an incredible panel focused on the action needed to tackle marine debris. Representatives from the sectors of philanthropy, with Wendy Schmidt, President of The Schmidt Family Foundation and co-founder of 11th Hour Racing, policy, with Lisa Svensson, Director for Ocean, UN Environment, and industry, with Jocelyn Bleriot, Executive Officer, Ellen McArthur Foundation, and moderator Tony Juniper left the room inspired and ready to tackle plastic pollution.

“At 11th our Racing we started by creating new partnerships, we pioneered a new model of sponsorship giving teams measurable goals to reach and competing not only for the trophy but also for something that is much longer-lasting – a real legacy and a methodology that every sport team can use to improve its performance and be a better friend to the environment while pursuing sport,” said Wendy Schmidt, Co-founder of 11th Hour Racing “Sustainability is not a trend and will not go out of fashion.”

Go behind the scenes with the Volvo Ocean Race and see what it takes to put on an Ocean Summit.