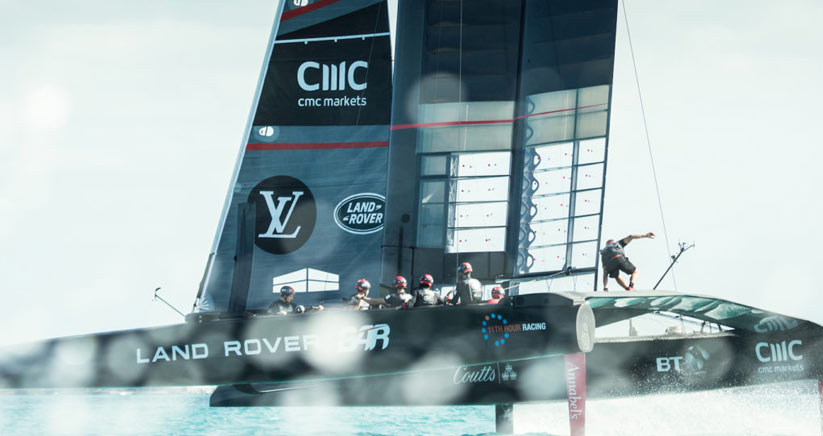 Winning on and off the water

Land Rover BAR have been based in Bermuda for three months now, and it’s less than 100 days to go until the start of the 35th America’s Cup.

It’s been a busy start to the year, we launched our America’s Cup Class (ACC) boat ‘R1’ – this is the boat we hope will help us bring the Cup back home to British waters for the first time since 1851.

Aside from our goal of winning the America’s Cup, we want to leave a lasting impression on Bermuda and are working with the team’s exclusive sustainability partner, 11th Hour Racing, to leave a legacy for the island that will remain well beyond our time here.

Alongside launching our race boat, we also officially opened the ‘11th Hour Racing Exploration Zone’, an exciting space designed to capture the imaginations of school children, local residents, families, tourists, and sailing enthusiasts. We want to inspire the next generation, let people explore interactive exhibits and see dynamic workshops on ocean health, invasive species, the New Plastics Economy and renewable energy, as well as the innovation and technology being developed by the team to bring the Cup home.

The ocean is our playground and you’d be hard pressed to find a sailor out there who didn’t care about the health of the oceans. Within the team we have a number of round the world sailors who have seen the destruction first-hand. It is estimated that the volume of plastic leaking into the sea is approximately eight million metric tons a year. Less than 20 percent of this originates from ocean-based sources like fisheries and fishing vessels. This means that over 80 percent of ocean plastic comes from land-based sources; once plastic is discarded, if processing or recycling is not well managed, it ends up in the sea. Once there, massive, circular ocean currents called gyres sweep the plastic into huge floating waste piles that our sailors have seen.

According to a 2016 report by the World Economic Forum and Ellen MacArthur Foundation, in a business-as-usual scenario, by 2050 oceans are expected to contain more plastics than fish (by weight). We now produce 20 times more plastic than we did in 1964 – this is expected to double in size in the next 20 years, and almost quadruple in size by 2050.

Businesses need to prioritize and think progressively, initiating systemic change across the board, and the good news is – they are starting to. At the end of 2016, 40 of the world’s biggest companies assembled at the World Economic Forum in Davos and agreed to come up with cleaner ways to make and consume plastic – as waste threatens the global ecosystem.

If enacted, the plan would see 70 percent of plastic packaging reused and recycled globally. Unilever said it would ensure that all of its plastic packaging “is fully reusable, recyclable or compostable by 2025”. As individuals we can take responsible action too, we can purchase with a strong ethical logic, we can reduce, reuse, refuse, recycle and upcycle. We can influence our community and can educate the future generation.

We hope to have over 2,000 young people through the doors of the 11th Hour Racing Exploration Zone between now and the start of the Cup (on the 26th May), and during the event this dedicated educational space will be open, for free, to all those visiting the America’s Cup Race village. We want Cup fans and spectators to visit us, to find out more on our sustainability goals and ethos – and get inspired to do one thing to make a difference.

At the start of the year, we were recognized for some our achievements by winning the Seafarers’ Award at the Boat International 2017 Ocean Awards – this award recognizes the individual or group from the sea-faring community that has done the most within the year to advance marine conservation – which was a huge boost to us all.

As a team we want to win both on and off the water but we know time is running out so we have to act fast.